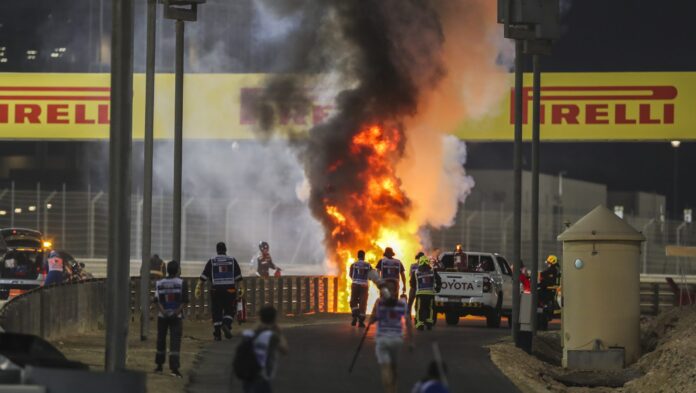 Romain Grosjean had a terrible accident at the Bahrain F1. This Haas Team racer almost died in the incident, luckily he survived.
The accident, which looks more like an action film, occurred on the first lap of the Bahrain Grand Prix, at the Bahrain International Circuit, Sunday (29/11/2020) evening WIB.

It all started when the VF-20 driven by Grosjean was hit from behind by another racer. In the collision, sparks could be seen from the back of the Grosjean’s vehicle.

A moment later the car lost control and violently hit the circuit barrier. As soon as the explosion occurred to the car, a big fireball could be seen emerging from the crash.

A huge fire burned Grosjean’s VF-20. From the air it could be seen that the car was split in half almost right in the middle, separating the front and rear.

Luckily there were no casualties in the accident. Grosjean managed to save himself. Assisted by the marshal, he managed to jump over the guardrail to get out of the flames.

Quoted from Skysports, Grosjean was immediately taken to the Armed Forces Hospital, which is located not far from the circuit. He stayed at the hospital for further examination and treatment.

Recent reports said he was not seriously injured, including no fractures. However, this Swiss-born racer suffered burns, especially on his hands.

An update from Romain posted by his team’s through their Twitter account, @ HaasF1Team. Pleased to see you’re in good spirits! We hope you make a speedy recovery, November 29, 2020, “Hello everyone, I just wanted to say that I am fine,” Grosjean said in a short video posted by Tim Haas.

The Bahrain GP FI was stopped for about 45 minutes due to the accident. After restarting, Lewis Hamilton managed to become champion.