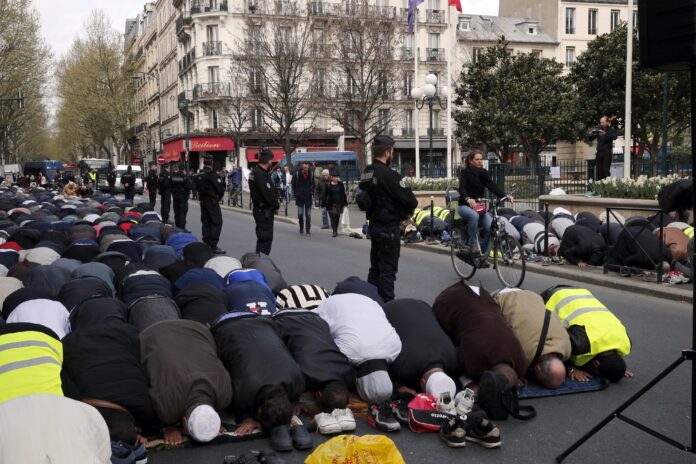 Shock and suspicion lingered on French Muslims following three terror attacks in the past five weeks, in which two victims were publicly beheaded, the AP news agency reported.

The minority, mostly from North Africa and the Middle East, was cornered again when President Emmanuel Macron recently made a speech about “Islamic separatism” as a platform for radicalism.

He complained about the phenomenon of a parallel society, in which a group of Muslims tended to live in isolation under the umbrella of Sharia, and secluded them from the republican constitution. Macron emphasized that loyalty to the state must underlie religious life.

After the latest terror of beheading, most of the Muslims refrained from causing any additional fuss. Islamic leaders called for peace. Demonstrations that marked Muslim-majority countries also failed to reverberate in France.

But deep down, some feel they are being blamed by the waves of terror about the Prophet Muhammad’s caricature. The situation is “worrying for Muslims,” ​​Hicham Benaissa, a Muslim sociologist said.

In his social sphere, Benaissa said some acquaintances had “intended to leave France. The situation was tense. There was fear.”

Islam with five million followers is the second largest religion in France. The Muslim population there is the largest in Western Europe. Most of them are immigrant families in the second or third generation. However, many of them have difficulty identifying themselves with their country of birth, partly due to cross-generational discrimination that prevents minorities from accessing society.

After the brutal attacks in Paris and Nice, Muslim figures were busy giving criticism. “The attack touched our brothers and sisters who prayed to their Lord.” the Imam of the al-Rahma mosque in Nice, Otman Aissaoui said.

“However once again we are stigmatized, and people are quick to make conclusions,” he added, referring to a group of Muslims from North Africa, a former French colony.

“Muslims are neither guilty nor responsible for the terror attacks. We don’t have to defend ourselves,” Abdallah Zekri, a member of the Muslim Council of France, said.

Secularism As A Product of History

France sees the importance of the secularism law which was born out of conflict with the Catholic Church in 1905. Since then religion has been prohibited from interfering in government affairs, or being involved in making public policy.

However, according to Tareq Oubrou, a preacher from Bordeaux, “the existence of Islam was something the French public did not expect before,” he told the AP.

Throughout its history, the process of legislating the Secularism Law has repeatedly triggered tensions, such as the amendments in 2004 and 2010 that prohibited the headscarf and face covering in schools. “Secularism has always been a veil to cover how Islam is treated,” Benaissa said.

Rim-Salah Alouane, a doctoral candidate at the University of Toulouse Capitole, is even more scathing. “Since the 1990s, Laicism has been created to limit the appearance of religious symbols in public spaces, especially for Muslims,” ​​he said.

The emergence of Islamic symbols in the public sphere has been slow and with minimal attention, until right populist groups have begun campaigning for the idea of ​​Islam as a threat to French identity.

“The state must respect and welcome social diversity, not consider it a threat,” Alouane added.

Islam Is Not One

Many Muslims who come to France work in the manufacturing sector such as in the automotive or construction industry. “Their existence is very important for France,” Benaissa said. “Now, when a woman wearing headscarf arrives at the company, suddenly there is a refusal. What happens?” he questioned.

Benaisse said that unlike the previous generation, young people with migrant backgrounds in France received a higher level of education than their parents.

Olivier Roy, a well-known French political analyst, told a committee in parliament that most Muslims must work hard to integrate themselves into French culture. They reformatted themselves to the (values) of the French Republic and complained that they received no reward or recognition.

Stigmatization of Muslims occurs in the form of police checks or discrimination in the labor market.