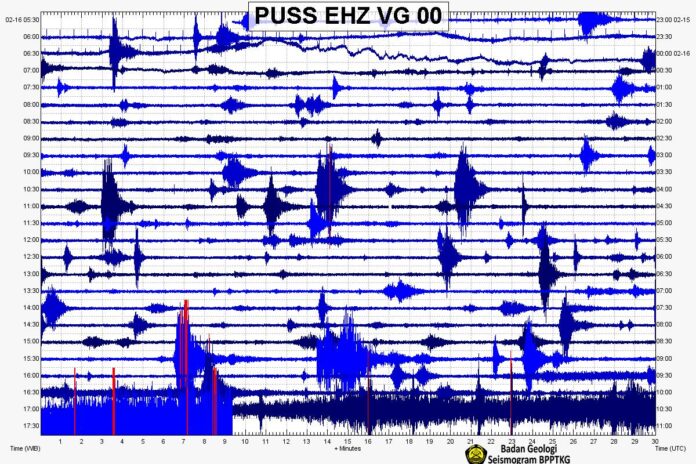 Mount Merapi on the border of Central Java and the Special Region of Yogyakarta, Tuesday (16/2/2021), issued 12 incandescent lava avalanches with a maximum sliding distance of 1.5 kilometers (km) to the southwest during the observation period from 00.00 to 06.00 WIB.

The weather on the mountain was cloudy and cloudy. The wind blows weakly to the east with air temperatures of 13.5-25.3 degrees Celsius, humidity 75-79 percent and air pressure 626.9-704.8 mmHg.

Based on observations over the past week, from 5 to 11 February 2021, BPPTKG concluded that Mount Merapi’s volcanic activity is still quite high in the form of effusive eruptive activity. The BPPTKG still maintains the status of Mount Merapi at Level III or Alert.

The lava avalanches and hot clouds of Merapi are estimated to have an impact on the south-southwest sector, which includes Sungai Kuning, Boyong, Bedog, Krasak, Bebeng and Putih. In the event of an eruption, the eruption of volcanic material from Mount Merapi can reach an area within a radius of three km from the top of the mountain.