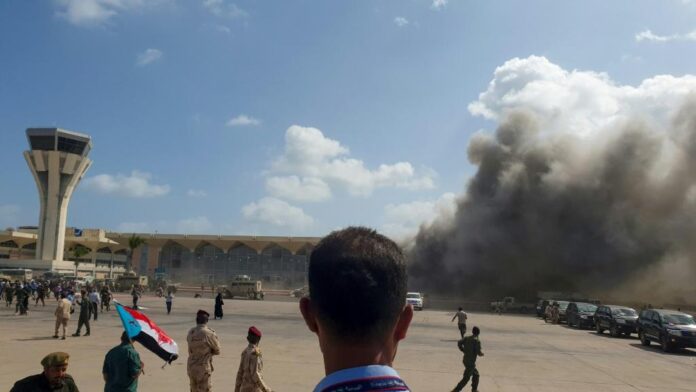 Loud explosions occurred at Yemen’s Aden International Airport on Wednesday (30/12). At least 26 people died and more than 50 people were injured because of the incident.

The explosion was heard shortly after the plane carrying members of the cabinet of the newly formed Yemeni government arrived from Saudi Arabia.

Eryani accused the blast as cowardice of the Houthi rebel movement.

“We assure our citizens that members of the government cabinet are well and we guarantee that the cowardly terrorist attack by the Iranian-backed Huthi militia will not prevent us from carrying out our patriotic duties,” Eryani said in an upload on his Twitter account.

Until this news was released, the cause of the explosion was not yet known.

Yemeni government spokesman Rajih Badi called for an international investigation into the terrorist attack which he said targeted all cabinet members.

“It is too quick to accuse any party before the investigation of whoever executed the attack, including (accusing) the Houthis,” Badi told AFP.

Yemeni President Abd-Rabbu Mansour Hadi inaugurated the cabinet of the new Yemeni government on Saturday (26/12) in Riyadh, Saudi Arabia. The cabinet consists of representatives from the northern and southern regions of Yemen.

The new government is expected to end the power struggle between Hadi’s supporters and separatist groups that have plunged said Hammadi in a press conference on Wednesday (30/12).