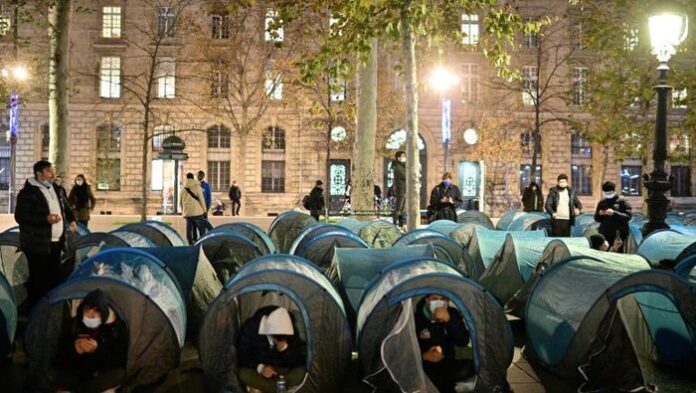 French police used tear gas to disperse a new immigrant camp in central Paris. Hundreds of refugees stayed in the camp who were evacuated from temporary shelters on the suburbs.

The volunteers helped set up about 500 blue tents at Place de la Republique in the heart of the French capital on Monday evening local time (23/11), which was quickly filled with immigrants, the majority came from Afghanistan.

About an hour later the police came to dismantle the camp. They lifted the tents even though there were still people inside. They also received protests from migrants and ridicule from volunteers.

“They are too cruel,” Shahbuddin, a 34 year old Afghan refugee sobbed. He was forced out of his tent. “We just want a roof.”

Police then used tear gas to disperse the remainder of the camp, sending the migrants out onto the streets of central Paris.

Ian Brossart, deputy mayor in charge of housing, emergency accommodation and refugee protection, condemned “the law and order response to the social situation”.

Meanwhile, French Minister of Home Affair, Gerald Darmanin said the photos of the demolition were “shocking” and that he had ordered the city police to report on the permit.

It is known that thousands of people had traveled from Paris to the port of Calais and were trying to smuggle in trucks headed to England. A small number of people tried to cross by boat.