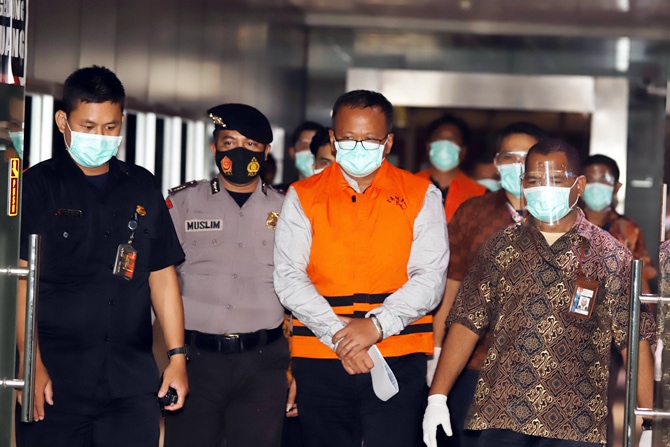 Minister of Marine Affairs and Fisheries (KKP), Edhy Prabowo is alleged to receive bribes related to the export of lobster larvae. What is the construction like?

Edhy Prabowo was arrested by the Corruption Eradication Commision (KPK) on Tuesday (24/11) just before midnight at Soekarno-Hatta Airport, Cengkareng. At that time Edhy Prabowo got off the plane that brought him from Japan. Previously, Edhy Prabowo and his entourage visited Hawaii, United States (US) and then returned to Indonesia by first transiting in Japan. A total of 17 people were secured by the KPK, including Edhy Prabowo’s wife, Iis Rosyati Dewi.

“The parties were subsequently secured and taken to the KPK’s Red and White Building for further investigation,” KPK Deputy Chairman, Nawawi Pomolango, said at a press conference at the KPK, Jalan Kuningan Persada, Wednesday (11/25/2020).

After conducting the case title, the KPK also named 7 suspects as follows:

1. Edhy Prabowo as Minister of KKP;

2. Safri as Staff of the Minister of KKP;

3. Andreau Pribadi Misanta as Special Staff of the Minister of KKP;

5. Ainul Faqih as the staff of the wife of the Minister of KKP; and

“With the authority possessed as a mandate to hold a position, a public official has the opportunity to make policies that are in favor of the interests of the nation and the state. Therefore, do not confuse these powers and responsibilities only for the sake of fulfilling personal or group interests,” Nawawi said.

For his actions, the six suspected recipients were suspected of Article 12 paragraph (1) letter a or b or Article 11 of Law Number 31 of 1999 as amended by Law Number 20 of 2001 concerning Eradication of Corruption in conjunction with Article 55 paragraph (1 ) to 1 KUHP.

Meanwhile, the suspected giver is suspected of Article 5 paragraph (1) letter a or b or Article 13 of Law Number 31 Year 1999 as amended by Law Number 20 Year 2001 concerning Eradication of Corruption Crime.

So what about the case and the flow of bribes?

2. In early October 2020, Suharjito as Director of PT Dua Putra Perkasa (PT DPP) came to the KKP office on the 16th floor to meet with Safri. During the meeting, it was discovered that the need for lobster larvae export could only be done through PT Aero Citra Kargo or PT ACK as a forwarder with a transportation cost of Rp 1,800 per lobster larvae.

4. Based on ownership data, PT ACK holders consist of Amri and Ahmad Bahtiar who are suspected of being nominees from Edhy Prabowo and Yudi Surya Atmaja’s side.

5. The money that went into PT ACK’s account, which was thought to have originated from several export companies, was subsequently withdrawn and entered into the accounts of Amri and Ahmad Bahtiar, each with a total of Rp 9.8 billion.

6. Then on November 5, 2020, it is suspected that there was a transfer from Ahmad Bahtiar to the account of a bank in the name of Ainul Faqih as the staff of the wife of the Minister of KKP in the amount of Rp 3.4 billion which was used for the needs of Edhy Prabowo, Iis Rosyati Dewi, Safri, and Andreau Pribadi Misanta , as follows:

– Edhy Prabowo and Iis Rosyati Dewi shopped in Honolulu, Hawaii, United States on November 21-23 for around IDR 750 million in the form of Rolex watches, Tumi and Louis Vuitton bags, and Old Navy shirts;

– Besides that, around May 2020, Edhy Prabowo allegedly received US $ 100,000 from Suharjito which he received through Safri and Amiril Mukminin; and