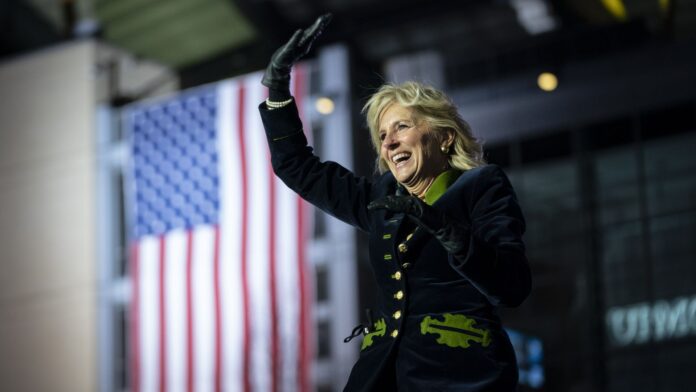 This woman whose real name is Jill Tracy Jacobs was born in 1951 in New Jersey, United States. Jill Biden is the oldest sister of five children. This 69-year-old woman grew up in Willow Grace, Pennsylvania.

His father named Donald worked at a savings and loan bank, while his mother, Bonny was a housewife. Before marrying Joe Biden, Jill was married to a soccer player named Bill Stevenson. Jill and Bill then decided to divorce in 1975.

Jill Biden graduated from Moreland High School in 1969. After graduating she continued her education to college in Pennsylvania.  Jill Biden had studied fashion at Brandywine Junior College, Pennsylvania. After that she felt that she entered the wrong major and decided to leave. She then transferred to Delware University and majored in English. Before entering college again, Jill had a career as a model for a year.

In February 1970, Jill married Bill Stevenson. Both of them then decided to return to continue their education at the University of Delaware. However, before finishing college, Jill and Bill decided to divorce.

In 1975, Jill met Joe Biden on a blind date arranged by Joe’s brother. At that time Jill was still in college and Joe was a senator with two children. Since then, their relationship has continued. Until finally, after five attempts to propose to Jill, Joe Biden was finally accepted.

Joe and Jill Biden then decided to get married in 1981. From this marriage they had a daughter named Ashley. Joe and Jill then raised Ashley and their two children from Joe’s previous marriage in Wilmington, Delaware.

Jill actually worked as an English teacher at a local public school after graduating from the University of Delaware in 1975. In addition, Jill also worked in a psychiatric hospital. Jill then obtained two master’s degrees, first from West Chester University in 1981 and the second from Villanova University in 1987.

For 15 years Jill taught English Composition at Delaware Technical and Community College. Then in 2006 she returned to education to pursue a doctorate at the University of Delaware. Jill also acquired a doctorate degree in 2007.

Currently, after her husband was elected president of the United States, Jill Biden plans to do two jobs at once, becoming First Lady and professor of English.