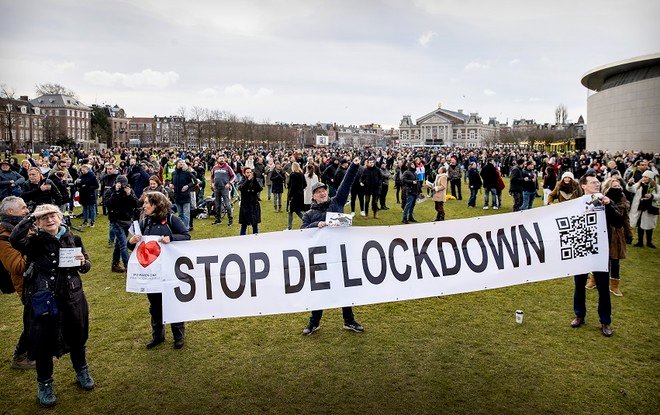 Protesters had gathered in defianc eof lockdown orders in at least 10 towns and cities, looting stores and clashing with police after authorities imposed a new
nighttime curfew — the first in the Netherlands since World War II.

The curfew, from 9 p.m. to 4:30 a.m., tightens an already strict lockdown aimed at curbing coronavirus infections and comes amid fears that a new, more contagious
variant, first identified in Britain, will cause a surge in cases.

Bars and restaurants have been closed in the Netherlands since October, and schools and shops were shuttered in December. So far the government has recorded some 944,000 coronavirus infections and more than 13,500 deaths.

The rioting, which started with the torching of a coronavirus testing center in a fishing village on Saturday night, is the worst to hit the Netherlands in years.

It was initially triggered by anger over a tough coronavirus lockdown that has been in force since mid-December but escalated into vandalism by crowds influenced by messages from social media.

The violence has stretched the police and led at times to the deployment of military police. On Monday night, rioters pelted police with rocks, fireworks and Molotov cocktails and looted shops in at least two cities, Rotterdam and Den Bosch.

Justice Minister Ferd Grapperhaus said earlier on Tuesday that rioters would quickly be brought before the courts and face possible prison terms if convicted. Violators of the 9 p.m. to 4:30 a.m. curfew, which is set to last until at least February 10, face a €95 ($115) fine. Exemptions are allowed, for example for people having to work, attend funerals or walk their dogs, on condition that they present a certificate.