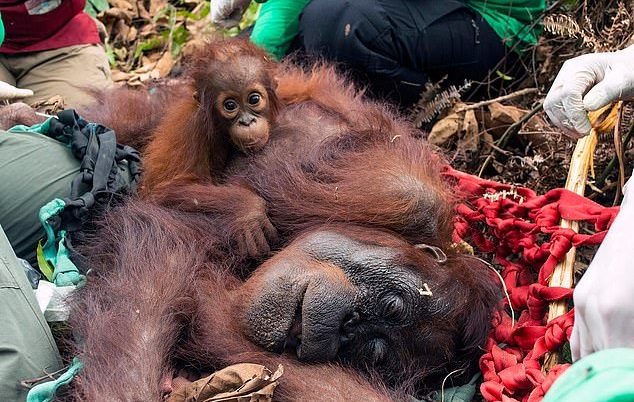 The Central Kalimantan Natural Resources Conservation Agency (BKSDA) rescued three orangutans (Pongo pygmaeus) in Kotawaringin Timur (Kotim) district. The orangutans were starved while another was injured by a sharp weapon.

“There are three in total. Two, namely mother and child on Jalan Jenderal Sudirman and one adult orangutan in Lampuyang Village, Teluk Sampit District,” the Commander of Central Kalimantan BKSDA Sampit Post, Muriansyah, said, in Sampit, Tuesday (2/2 / ) 2021) as reported by Antara.

The evacuation was carried out in one day last Sunday (31/1). The rescue of protected animals was assisted by the Orang Utan Foundation International (OFI) who came to East Kotawaringin and the Central Kalimantan BKSDA team from the Conservation Section II of Pangkalan Bun.

The residents reported the orangutans in the rubber plantation on Jalan Jenderal Sudirman, kilometer 11, since last week. Residents said there were three orangutans visible, namely male and female broodstock, and a young orangutan.

Muriansyah explained that about a week the BKSDA team made calls and the last thing that was seen were only the female mother and her child. Rescues were made to the two orangutans.

“The rescue location was in the form of a rubber plantation. Orangutans were destroying and eating rubber tree bark because of the difficulty of getting food in their habitat,” he said.

Meanwhile, another orangutan who was rescued was about 25 years old in the rice fields of Lampuyang Village, Teluk Sampit District. The orangutan was found with a wound on the left side of the head, allegedly due to a sharp weapon.

A wound care worker sewed nine stitches to the head of the orangutan. The officer also asked the residents for information to look for the possibility of persecution by the orangutan.

“The three orangutans have been taken to Pangkalan Bun to be observed and prepared for release. We express our gratitude to the residents of km 11 Jalan Jenderal Sudirman, as well as residents and village officials of Lampuyang who have helped and collaborated with the Central Kalimantan BKSDA in the rescue process, ” Muriansyah said.