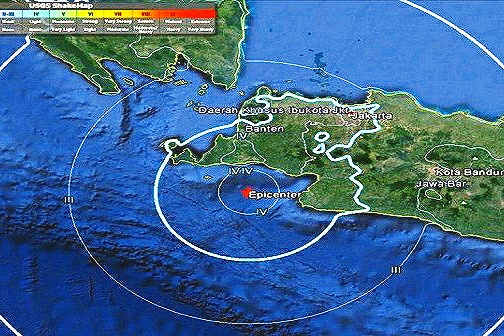 “On Wednesday, August 26, 2020 at 06.27.59 WIB the Sunda Strait region was rocked by a tectonic earthquake. The results of the BMKG analysis show that this earthquake has an update parameter with a magnitude of M = 5.1,” said Head of the Earthquake and Tsunami Center of BMKG Rahmat Triyono in a statement written, Wednesday (26/8/2020).

According to Rahmat, the epicenter of the earthquake was located at the coordinates of 6.75 South Latitude and 104.56 East Longitude. Precisely located at sea, at a distance of 141 km south of Kota Agung, Tanggamus Regency, Lampung at a depth of 43 km.

Rahmat also explained the types and mechanisms of this earthquake. According to him, earthquakes have an upward fault movement mechanism.

“By paying attention to the location of the epicenter and the depth of the hypocenter, the earthquake that occurred was a type of shallow earthquake due to the subduction activity of the Indo-Australian Plate that sank beneath the Eurasian Plate. The analysis of the source mechanism shows that the earthquake has a thrust fault movement mechanism. , “said Rahmat.

“Until now, there has been no report on the impact of the damage caused by the earthquake. The modeling results show that this earthquake has no potential for a tsunami,” he said. He said based on the results of BMKG monitoring, there had not been any aftershocks. People are urged to remain calm and not be affected by issues that are not true.