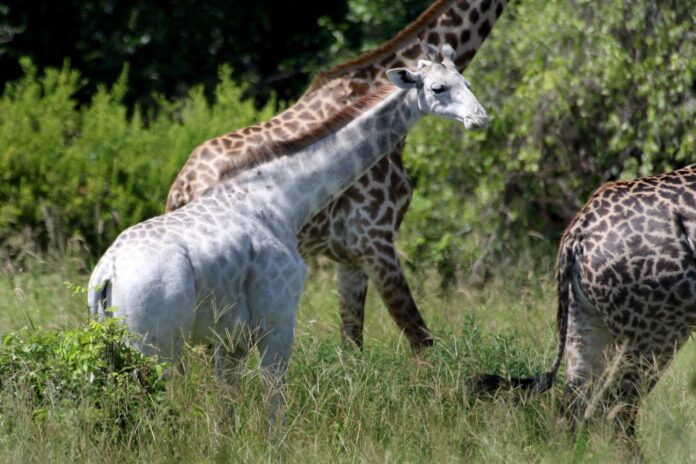 The white giraffe, the only one in the world, is now equipped with a GPS tracking device to avoid it from poachers in northeastern Kenya.

A conservation group says forest rangers can monitor the movement of male giraffes in real time.

The giraffe has a rare genetic condition called leucism, which causes it to lose skin pigmentation.

He is thought to be the last species of white giraffe, after poachers killed two other white giraffes in March.

The forest rangers worry that the giraffe will be hunted as two other giraffes – a female and her seven month old cub – which had the same skin condition.

The carcasses of the two white giraffes were found in a conservation area northeast of Garissa, Kenya, where the male giraffe lives alone.

Ishaqbini Hirola Community Conservancy, which monitors wildlife in the area, said the tracking device was installed on one of the giraffe’s horns on November 8.

In a written statement on Tuesday (17/11), the NGO said the tracking device will provide updates every hour on the giraffe’s whereabouts, making it easier for forest rangers to keep this unique animal safe from poachers.

The conservation group’s manager, Mohammed Ahmednoor, thanked conservationists for their help in protecting giraffes and other wildlife.

“The giraffe’s grazing area has been blessed with heavy rains recently and the abundant vegetation. It bodes well for the future of the male white giraffe,” he said.

The Wildlife Community of Kenya, the main conservation agency in eastern Africa, said they’re happy to help protect unique wildlife such as the only known white giraffe.

The white giraffe was first discovered in Kenya in March 2016, about two months after a sighting in neighboring Tanzania.

One year later, the white giraffe is back in the headlines after a female white giraffe and its cub were caught on camera in a conservation area in Garissa, Kenya.

Living in more than 15 countries in Africa, the giraffe is the tallest mammal in the world. They are targeted by poachers for their skin, flesh and body parts.

About 40% of the giraffe population has disappeared in the past 30 years, with hunting and trafficking of wildlife contributing to the decline in the population of these animals, according to the African Wildlife Foundation (AWF).

The giraffes have been designated a vulnerable species on the International Union for Conservation of Nature (IUCN) Red List, with an estimated population of 68,293 globally.