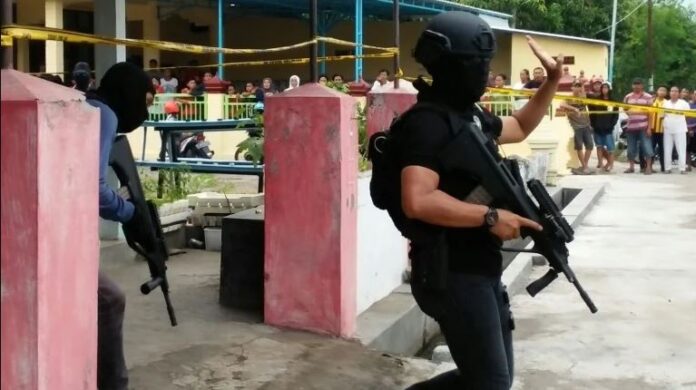 A suspected terrorist man with the initials HAB was arrested by the Densus 88 Anti-terror Team in Mojokerto Regency. This 53 year old man is the owner of an Umrah and Hajj travel business.

What would he look like to family and neighbors?

The team raid from Densus 88 Anti-terror targeted the RAW hajj and umrah travel office on Jalan Raya Pungging number 30, RT 4 RW 5, Kecamatan Pungging, Mojokerto Regency at around 14.00 WIB. This travel and tour office is also home to a married couple with the initials HAB and NA (56).

HAB was arrested by a team from Densus 88 Anti-terror in the raid. At that time he was at home with NA, as well as NA’s mother and 3 children. HAB has been in the Umrah and Hajj travel business for the last 3 years with his wife.

HAB’s brother-in-law, Udin (60) said, HAB is the second husband of NA. Her biological sister married HAB because her first husband had passed away. NA has 4 children with her first husband.

“His daily life (HAB) is normal. He is also kind to me. I was often given cigarettes when I visited here,” Udin said when talking with detikcom at HAB’s house, Wednesday (23/12/2020).

He explained that HAB was registered as a migrant in Pungging Village. The 53-year-old man comes from the Ampel area, Surabaya. In addition to pursuing the umrah and hajj travel business, HAB also trades goats during Eid al-Adha.

Udin did not expect that his brother-in-law would have anything to do with the police. According to him, currently his family was in shock because of the raid.

“His wife was shocked because suddenly many police officers raided her. There was also a search,” he explained.

The local residents also did not expect HAB to be the target of Densus 88 Anti-terror. As said by the Head of RT 4 RW 5 Dusun / Desa Pungging, Sukeri (41), according to him, there is nothing suspicious about the daily activities of HAB.

“HAB has a familiar face. I once communicated with him, he is an ordinary person. He used to pray at the mosque to the east of his house, sometimes he also joined RT associations,” he explained.