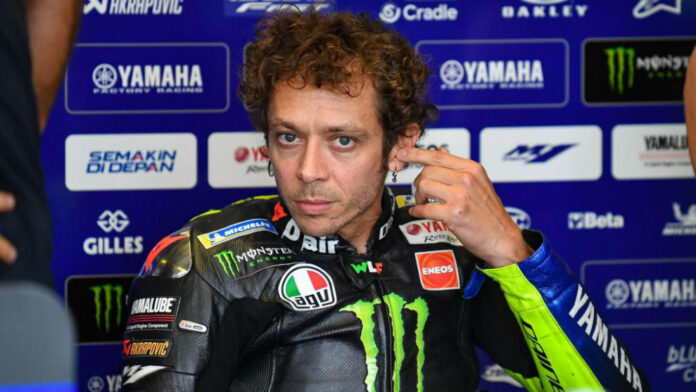 Valentino Rossi has been positive for the Corona virus. The Monster Energy Yamaha team immediately responded to the rider’s condition.

Rossi reported that he had tested positive COVID-19 on his Instagram account, Thursday (15/10/2020) night Indonesia time. The 41-year-old Rider saying via InstaStory:

“Unfortunately, this morning I woke up and I was not feeling good. My bones were score and I had a slight fever, so I immediately called the doctor who tested me twice. The ‘quick PCR test’ result was negative, just like the test I underwent on Tuesday. But the second one, of which the result was sent to me at 16:00 this afternoon, was unfortunately positive.

“I am so disappointed that I will have to miss the race at Aragon. I’d like to be optimistic and confident, but I expect the second round in Aragon to be a ‘no go’ for me as well… I am sad and angry because I did my best to respect the protocol and although the test I had on Tuesday was negative, I self-isolated since my arrival from le Mans. Anyways, this is the way it is, and I can’t do anything to change the situation. I will now follow the medical advice, and I just hope I will be feeling well soon.”

Valentino Rossi then had to undergo independent isolation at his home in Tavullia, Italy. This nine-time world champion is closely monitored by medical staff who are constantly reviewing his condition on a daily basis.

Rossi will not be able to participate in the MotoGP race at Aragon, Sunday (18/10). The conditions experienced by this Italian rider are also bad news for the Yamaha team.

Lin Jarvis, boss of the Yamaha team, expressed his sympathy for Rossi’s health condition, who suffered from covid-19. He and the rest of the team wish The Doctor a full recovery quickly, while ensuring that the rider’s disease does not spread to the rest of the team staff.

“This is very bad news for Valentino and also for the Monster Energy Yamaha MotoGP team, as well as for all MotoGP fans around the world. First and foremost, we hope that Valentino does not suffer too much in the coming days and can fully recover in a short time,” he said. Jarvis, quoted from the official MotoGP page.

“This is a second blow to us, following the absence of Project Leader Sumi-san and the five mechanics at Le Mans after one member tested positive covid-19 – although fortunately no symptoms at all. These two incidents remind us that no matter how careful you are, the risks are there – as we can see from the increasing transmission rates of corona cases in Europe this time”, he added.

“We have checked with the Italian health authorities and we have been informed that every member of our team who had contact with Valentino until Monday was not exposed to any direct risk. However, we will pay more attention from now on in order to minimize possible problems in the future. “said Lin Jarvis about the condition of Valentino Rossi and the Yamaha team.