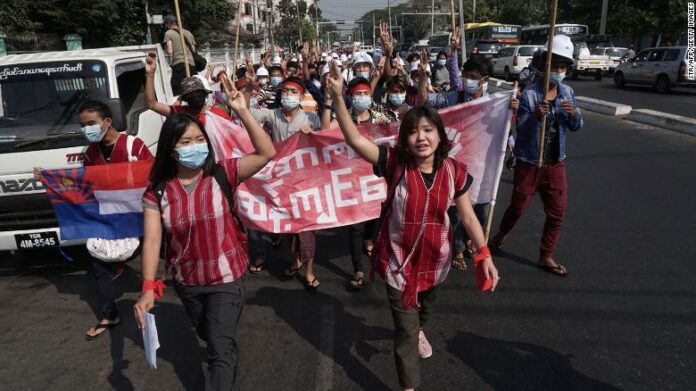 Thousands of anti-coup protesters in Myanmar poured back onto the streets Sunday, as an internet blackout failed to stifle growing outrage at the military’s ouster of elected leader Aung San Suu Kyi. The fresh rally followed the largest protests to date on Saturday, when tens of thousands came out in cities across the country to condemn the coup that brought a 10-year experiment with democracy to a crashing halt.

Thousands of chanting protesters marched in Yangon, backed by a din of car horns. They held up banners — including some saying “We do not want military dictatorship” — and the signature red flags of Suu Kyi’s National League of Democracy (NLD) party.

Some flashed the three-finger salute inspired by the “Hunger Games” films and used as a symbol of resistance by pro-democracy protesters in Thailand last year. Despite the large-scale deployment of riot police –- backed by water cannon — there have been no major clashes reported so far.

Myanmar will be under the whims of the military — and a state of emergency — for at least a year and Min Aung Hlaing has said elections will be held once the fraud probe has been completed, though analysts say they will want to ensure Suu Kyi cannot contest.

But dictators have a nasty tendency of promising one thing and doing another. And if street protests do gain momentum in the weeks to come, the full force of the military’s might could be unleashed.

Meanwhile protesters from Leaders and Organizers of Community Organizations in Asia (Locoa) have held a demonstration to show solidarity due to the loss of democracy in Myanmar at the Myanmar Embassy building in Central Jakarta on Friday.

Protesters gathered in front of the embassy at 10.00 a.m., bringing posters and placard that reads sympathy to bring back justice and civil rights in Myanmar. They also demanded that the Myanmar Embassy in Indonesia relay their message to Myanmar’s military junta to return the civilians’ power immediately.

The Peak of Covid-19 in Indonesia Has the Potential to Penetrate...