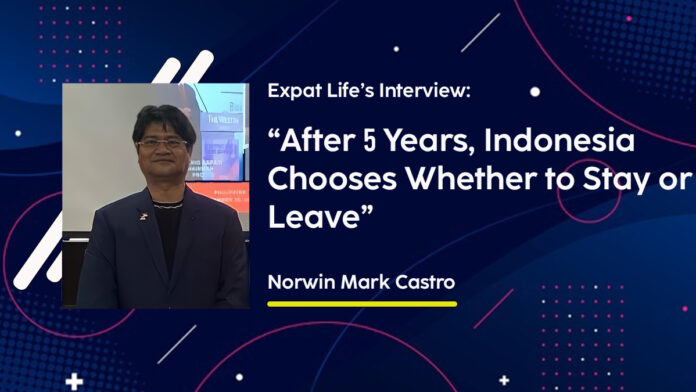 As a destination country for foreigners, whether for education, career, or business purposes, Indonesia has become a second home for them. Norwin Mark Castro, an expatriate from the Philippines who has been in Indonesia for 19 years. With this long enough time, he got used to various conditions here.

The man who is usually called Mark admitted that Indonesia was the country he chose to develop his career.

During his 19 years in Indonesia, Mark has visited several cities. Not infrequently he feels like a local person who often visits several big cities in Indonesia.

“Sometimes I feel like I’ve become such a local after 19 years that I only go to places where foreign tourists don’t visit and I end up seeing local tourists from Jakarta. The usual suspects, of course, Bandung, Bali, Bogor,” Mark explained.

According to him, being in Indonesia for almost 20 years is not enough to explore all places in Indonesia, which is one of the largest archipelagic countries in the world.

“There are over 17,000 islands in Indonesia, 19 years aren’t enough to cover it but what I can say is that I’ve seen Indonesia grow leaps and bounds over the years not just on urban areas but industries as well,” he said.

Being a part of the Philippine Business Club

Mark is a member of the Philippine Business Club, he served as secretary for 5 years and still continues today.

Philippine Business Club is a 6-year-old organization duly registered under Indonesian laws and in partnership with KADIN and Philippine Chamber as well.

According to him, this organization was built because most Filipino ex-pats in Indonesia have been individually approached by Indonesian businessmen and companies requesting assistance in entering the Philippine market.

“It turned out to be the same sentiment for the Philippines as well. It was then at this point that we decided to put up our own Chamber here so that we can have official representation both in Indonesian and Philippine governments,” Mark added.

In 2018, Philippine Business Club accompanied KADIN and its billionaire members to the Philippines to explore investments as well. Then, in 2019, they organized the 1st Philippine-Indonesia Economic & Investment Summit participated by government ministers of both countries and high-level net worth people.

Mark said that the Philippine Business Club has twice meetings in a month, one for the board members/directors and another one that is open to the public with interests in both countries.

He added that the Philippine Business Club always conducts high-level online meetings with secretaries and ministers of both countries, decision-makers, top corporate executives to enhance trade and investment of both countries.

His Career Journey in Indonesia

“I started with Bunda Group Healthcare, the company that owns the RS Bunda chain of hospitals. Spent 7 years with them and have maintained relations. Indonesia, as an Asian country, puts a premium on relationships and I think it’s the word of mouth, the relations, that moved me from one group to another over the past 19 years,” he said.

As one of the people who contribute to the business development between Indonesia and the Philippines, Mark shared his thoughts about prospects that can be generated between the two countries in the future.

“For instance, both countries almost always import medicines from India and Western countries, especially during a pandemic. Indonesia has 270 million people while the Philippines has about 108-110 million people. ASEAN has a combined population of 600 million so, as you can see, both Indonesia and the Philippines represent more than half of the entire population of ASEAN. Can you imagine if both countries created a medical pharma/research company that can develop vaccines for other diseases: malaria, dengue, etc,”

Being here for 19 years and still counting, proves that Mark chose to stay and dedicate his-self to the business progress, both for Indonesia and his home country, the Philippines.

“In the Filipino ex-pat community, Indonesia is a country you choose for the next 5 years based on your career projections, etc,”

“But, after 5 years, Indonesia chooses whether to stay or leave,”

Aviation Industry Predicted Back to Normal In Six Months