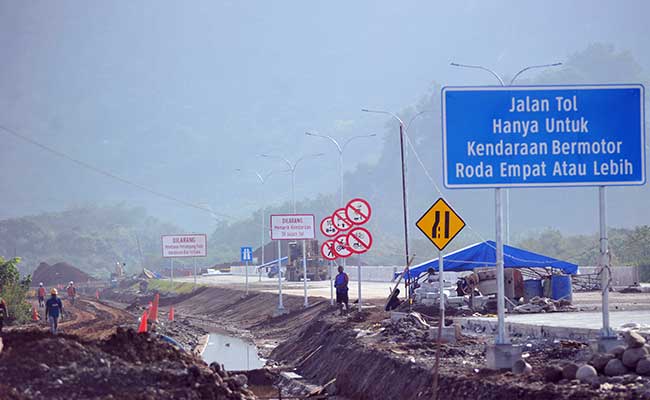 The toll road connecting Padang-Pekanbaru administrator is speeding up the completion of the 254.8-kilometer toll road project. The construction work on the section, which consists of six sections, will continue to progress after a delay.

Director of Operations III Hutama Karya Koentjoro explained that the company is working on priority sections that are included in the first phase of development, namely the Pekanbaru – Bangkinang Section (40 km) and the Sicincin – Padang Section (36 km). According to him, the construction process in the three priority sections is going well.

He explained that for the Pekanbaru – Padang section, the company is currently focusing on three priority sections with significant construction progress, namely Section 6 Pekanbaru – Bangkinang which has reached 83 percent with a realization for Km 9 to Km 40 has been completed 100 percent and functional feasibility tests have been carried out. toll roads by BPJT and other related parties.

Koentjoro explained that apart from the construction process, land acquisition is going quite well, especially on the Pekanbaru – Bangkinang toll road. Nevertheless, Hutama Karya does not deny that it is often faced with obstacles in the field, especially the problem of land acquisition in the West Sumatra region which is still a challenge in itself.

He said that on the Padang – Sicincin toll road, with land constraints that had been encountered, the company could only speed up the construction of the toll road according to the land that had been acquired. However, with the passage of time and support from various local stakeholders, we were able to get back on track in completing development targets.

“We appreciate all good coordination between parties so that it is hoped that the construction of the Pekanbaru – Padang toll road can run smoothly and return to running according to the predetermined target,” he said.

For information, the presence of the Pekanbaru – Padang Toll Road will later bring positive benefits to the economy and tourism of the two local areas. This toll road will also reduce travel time from Padang to Pekanbaru from 9 hours via arterial road to approximately 3 hours via toll road with an average speed of 80 km per hour.

Not only reducing travel time, but this toll road will also open up inter-regional connectivity to facilitate logistics distribution. In addition, this toll road will connect two seaports in Padang and Dumai, Riau, and will streamline the mobility of people and goods.

“The Pekanbaru – Padang toll road is planned to consist of eight interchanges, three on/off ramps and 12 toll gates. We ensure maximum efforts to accelerate the construction of this toll road, both in terms of construction and land acquisition, “he said.