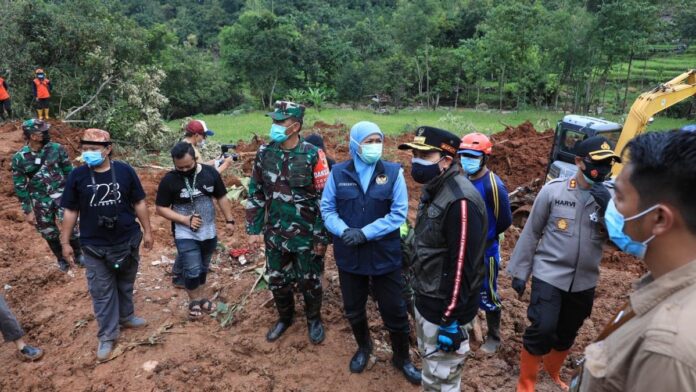 This was revealed by the Regent of Nganjuk, Novi Rahman Hidayat. He hopes that a number of victims who have not been found can be evacuated immediately.

“The reported victims have met 12. Two of them are still alive, 10 of whom have died. Hopefully the other victims will be found soon,” Novi said, Monday (15/2).

Novi further stated that he would carry out the process of evacuating the debris and searching for victims for 14 days. Regional Disaster Management Agency (BPBD) data states that the remaining victims in the search are nine people.

At the same time, his party is also working to prepare a relocation site for residents affected by landslides whose houses have been heavily damaged.

“The team is currently handling landslides. We are targeting 14 days to search for victims while clearing the debris. At the same time, prepare locations for residents affected by landslides,” he said.

Previously, landslides occurred in Selopuro, Ngetos, Nganjuk, East Java on Sunday (14/2) evening. A total of 14 residents managed to save themselves, they suffered minor injuries. In addition, 20 others were missing.

From 20 people, two people who had disappeared have been found, both of whom suffered serious injuries and were being treated. Then there were two residents who were found lifeless. It is now known that 16 other people are missing.

Apart from the casualties, landslides also caused heavy damage to eight houses. 147 residents also fled to the house of the Ngetos Village Head.

Evacuation of residents, handling of injured victims, and providing evacuation posts are being carried out. BPBD together with the East Java Dinsos moved quickly to provide for the needs of the refugees.