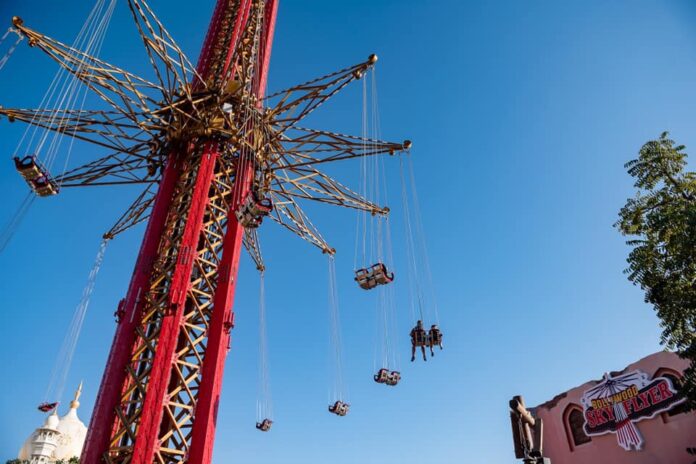 Dubai and China seem to always compete to build the tallest, largest, or grandest buildings. When it comes to the highest swing in the world, Dubai is the winner, because recently the game rides were opened to the public.

Called Bollywood Skyflyer, it feels like this vehicle must be tested for adrenaline addicts who will travel to Dubai after the Corona virus pandemic.

At 140 meters high – the same height as the Great Pyramid of Giza in Egypt – the world’s tallest swing vehicle beat the previous record holder by a difference of “only” about 10 meters.

Inaugurated last week at Dubai’s Bollywood Parks theme park, it sets a new record for the world’s highest swing, shifting the Orlando Starflyer, a swing ride in the United States 137 meters from the top.

Bollywood Skyflyer is constructed from 421 tonnes of steel. It took 600 days to build and another 120 days to install, Milton D’Souza, general manager of the park, said

Bollywood Parks Dubai was forced to close for several months due to the Covid-19 pandemic.

One of the three theme parks that make up Dubai Parks and Resorts, Bollywood Parks Dubai reopens on January 21, 2021 with nine new rides – including the world record-breaking swing, Bollywood Skyflyer.

Other new attractions at the Bollywood-themed park include a 55-meter-high Ferris wheel, a Mumbai taxi-themed rollercoaster and a freefall “rocket” that will “enliven the cultural diversity of India,” D’Souza said.

Like many other businesses, the park used the closure as an opportunity to expand and modernize its facilities and services.

“We took the time to create and build a new area in the park which we call the Zona Mela, which is home to the majority of the nine new rides at Dubai’s Bollywood Parks,” D’Souza told CNN.

In 2019, Dubai Parks and Resorts was visited by 2.6 million visitors.

D’Souza hopes the “renovation” will encourage more guests to visit the park in the future, as Dubai grows in popularity as a tourist destination.

Bollywood Parks will break even more records in 2021, D’Souza said.

Later this year, the park plans to open Bombay Express – the region’s first and only wooden rollercoaster.

Meanwhile, outside of Dubai Parks and Resorts, Ain Dubai will take the title of tallest Ferris wheel in the world when it opens in 2021 on Bluewaters Island.

At 210 meters in height, Ain Dubai will steal the title from the 167-meter-high High Roller in Las Vegas.