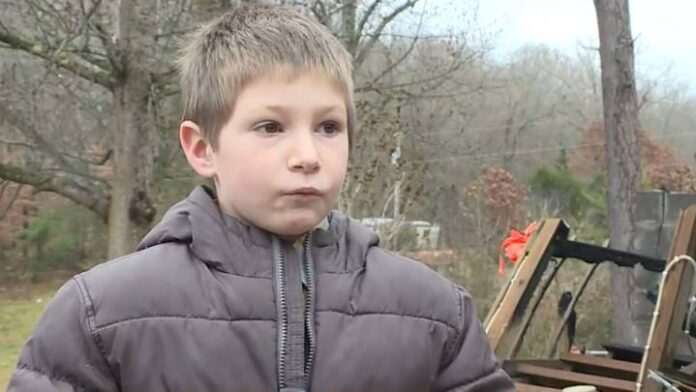 A seven-year-old boy in New Tazewell, Tennessee, United States rescued his younger sister when a fire engulfs his house. The boy named Eli rushed to his sister’s room through the window to save the life of his little sister, Erin.

The fire that broke out on December 8 burned the house of Chris and Nicole Davidson’s couple. At that time, a couple with their three children had just put them to sleep at 20.30 at night.

Nicole, the mother woke up a few hours later due to the smell of smoke.

Within minutes, their house caught fire and Erin who was only 22 months old was trapped in her room.

The couple managed to save their two children, Eli and Elijah. Unfortunately, however, Erin’s room was under fire.

“The smoke and flames were so thick that there was no way I could get near them,” Chris told CNN.

“We went outside to save her from the window, but there was nothing I could hold onto to reach (in) there. So I worked on Eli, who went through the window and was able to grab her from her bed. We are very proud of Eli. He did something great a grown man could not do, “he added.

When 20 firefighters arrived at the location, the house was engulfed in flames. New Tazewell Fire Chief Josh Miracle said there was “nothing left” of their home.

The Davidson family has raised 34 children, including Eli and adopted two other children, Erin and Elijah, both Nicole and Chris are also former firefighters.

At this point they had to start over “from scratch.” Apart from the impact of the fires, they also lost their jobs due to the pandemic. Recently, a fundraising action was launched to help them financially.

“We lost everything we ever had. Our whole life was in that house. Our three cars were also damaged in the fire. We have nothing now,” Chris said.

This Is a List of World Leaders Who Will Be Attending...