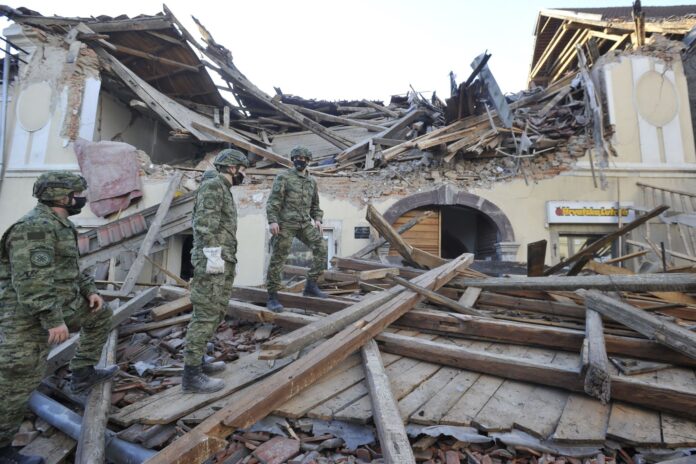 An earthquake with a magnitude of 6.3 rocked Croatia again on Tuesday (29/12). At least two people were killed, including a 12-year-old girl, and dozens of other residents were injured.

The European Mediterranean Seismological Center (EMSC) noted the earthquake occurred about 46 kilometers southeast of the Croatian capital, Zagreb. The day before, the same location was shaken by an earthquake measuring 5.2 M.

“Our city is completely destroyed. Children are dead,” Mayor of Petrinja, Darinko Dumbovic, said in a statement to local TV station HRT TV, as reported by the Associated Press.

The worst damage occurred in the city of Petrinja, which has a population of around 25 thousand people. The city’s power grid was down.

Dumbovic described half of the city as being destroyed by a nuclear bomb attack in Hiroshima City, Japan.

Croatian Prime Minister Andrej Plenkovic and other members of the government cabinet rushed to the site after the earthquake.

“Most of the Petrinja centers are in the red zone, meaning that the majority of the buildings are unusable,” Plencovic said.

Plencovic also said that the army had prepared 500 barracks to accommodate residents. Some residents were also directed to take refuge at a nearby hotel.

“Nobody should be outside in the cold tonight,” he said.

AFP reported, the earthquake made residents panic running for shelter. Rescuers were dispatched to comb the debris.

Croatian Health Minister Vili Beros said Covid-19 patients and others from a local mental hospital would be moved to another city to make room for earthquake victims.

“I’m afraid, I can’t contact anyone at home because the telephone network is down,” a woman in Petrinja told TV station N1.

Previously, Before the second earthquake, an earthquake with a magnitude of 5.2 rocked central Croatia and the capital of Zagreb, Croatia on Monday (28/12) morning. The EMCS reported earthquake shocks were felt in areas outside Zagreb and no casualties had been reported although many buildings were damaged.

The earthquake that occurred on Monday at 5.30 am local time woke residents who were still sleeping. The mayor of Petrinje, Darinko Dumbovic, said the earthquake could crack the walls of buildings.