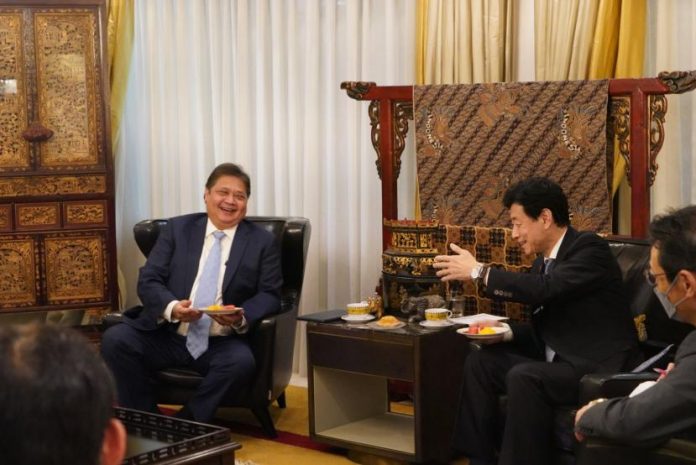 Cooperation between Indonesia and Japan continues. This time, the two countries agreed to strengthen the industrial and manufacturing sectors through strategic steps and the commitment implementation made in both bilateral and regional forums.

One of the agendas that will become the focus of the two countries shortly is the completion of the protocol for amendments to the Indonesia-Japan Economic Partnership Agreement (IJ-EPA). This protocol will be announced by the two heads of state at the G20 Summit in November 2022 in Bali.

“We will open wider access and offer more substantive ones concerning trade in goods negotiations related to manufactured products. We hope that this will be mutually beneficial for both parties,” said Industry Minister Agus Gumiwang Kartasasmita in a statement in Jakarta, Thursday.

Several issues that are still being negotiated in the IJEPA collaboration include trade in goods, and services, economic cooperation, the movement of individuals (MNP), and the Rule of Origin.

There are also issues related to the industry, implementation of New MIDEC, and improved offers for steel products.

Meanwhile, on the agenda of the G20 Presidency, the Ministry of Industry expects support from the Japanese Minister of Economy, Trade, and Industry (METI) for the sustainability of industrial inclusion in discussions at the G20 forum.

In the Zero Draft Ministerial Statement on Trade, Investment and Industry which was distributed to G20 members, Indonesia proposed an alternative to the establishment of an Industry Working Group as a forum for discussing industrial issues in the next Presidency.

In a meeting with the Coordinating Minister for Economic Affairs Airlangga Hartarto and the Minister of Industry in Jakarta last week, the newly inaugurated Minister of METI Nishimura Yasutoshi expressed his appreciation for the Indonesian Presidency at the G20 and supported the discussion of industrial issues to be continued.

In addition, Indonesia expects support from Japan to accelerate the achievement of zero emissions through collaboration in innovative technologies such as hydrogen and ammonia technology.

“In addition, it is also hoped that the support of new Japanese knowledge and technology to support several strategic projects in Indonesia, especially for the downstream of natural commodities, the development of electric cars and motorcycles, as well as the health and food sector,” he added.

The Minister of Industry also appreciates the commitment of Japanese automotive companies that continue to increase their investment in Indonesia, such as Mitsubishi which is committed to increasing investment for new models including hybrid types, and Toyota which will make large investments to produce electric vehicles.