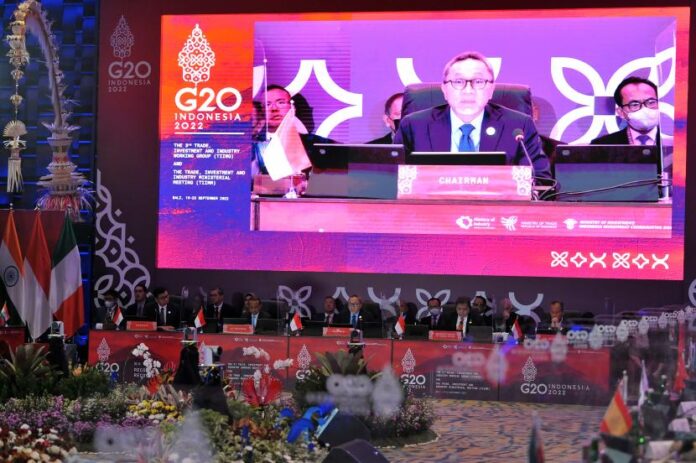 Indonesia managed to secure trade contracts worth nearly US$ 1 billion from 23 trade contracts in the G20 Trade, Investment, and Industry Ministerial Meeting (TIIMM) with several countries.

This was conveyed by the Minister of Trade Zulkifli Hasan on the sidelines of the G20 series. At that time, Indonesia held bilateral meetings with 13 partner countries, namely Australia, South Africa, the US, Saudi Arabia, India, the UK, Canada, South Korea, New Zealand, Singapore, Spain, the United Arab Emirates, and the European Union.

“As a concrete effort to optimize Indonesia’s trade relations with partner countries, contracts have been signed between Indonesian business actors and their partners from 13 countries,” said Zulhas, in Nusa Dua, Friday (23/9/2022).

He said that there were 23 trade contracts signed with a value of almost US$1 billion.

“Alhamdulillah, there are 23 contracts with a value of almost US$1 billion. This is on the sidelines of [TIIMM], meaning sideways, especially for special trade missions,” he said.

He explained that one of the trade contracts signed was a cooperation contract for the development of human resources in the IT field. This contract will be used for trade-in services.

In this case, the contract is between Australian business actors and Indonesia, within the framework of the Indonesia Australia Comprehensive Economic Partnership Agreement (IA-CEPA).

“This is a concrete effort for partner country relations, especially countries that have signed contracts,” said Zulhas.

These meetings are expected to have a concrete impact on the utilization of trade agreements that Indonesia has with several partner countries. Business actors are also encouraged to take advantage of every economic agreement that has been opened by the government in bilateral agreements.

Previously, Minister of Trade Zulkifli Hasan also met with Associate Secretary, Department for Foreign Affairs and Trade, Australia Tim Yeend during the signing of a trade contract or MoU between Indonesia and Australia virtually at the G20 Trade, Investment, and Industry Ministerial Meeting (TIIMM) in Nusa Dua, Badung, Bali, Wednesday (21/9/2022).

The bilateral meeting as well as the signing of a trade contract or MoU between Indonesia and Australia is a form of cooperation in the field of trade in services that is mutually beneficial to improve export performance which is an important part of the Indonesia-Australia Comprehensive Economic Partnership Agreement.

Do This to Avoid Your Work Burnouts

The Housing Business Will Increase 20 Percent To IDR 110 Trillion This Year, Is It a New Opportunity?

This is a list of hotels that will be used as isolation places for...