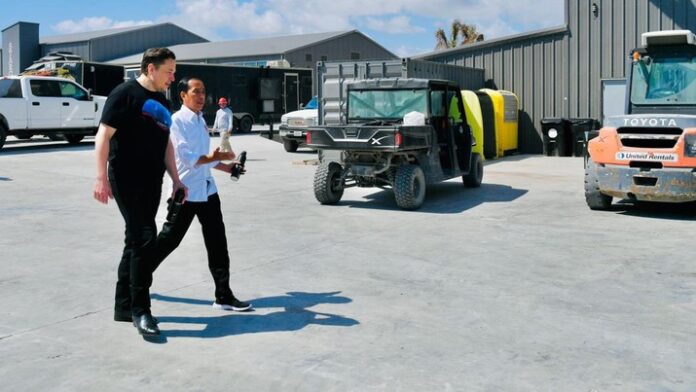 The Jokowi’s shoes have caught the public’s attention. How not, Jokowi chose to use local brand shoes from the NAH Project, a local company from Malang, East Java instead of using international brand shoes. Suddenly the public shouted the words: Local Pride!

On his official Instagram, the NAH Project account also shared a photo of Jokowi wearing his shoes when he met Elon Musk.

FlexKnit, the name of the shoe used by Jokowi, has been released by NAH Project in 2018. They claim that FlexKnit is very light, comfortable to wear, anti-slip, and has a material that is not hot.

The FlexKnit shoes that Jokowi uses are Carbon Black. The whole body to the shoelaces is black, while the sole is white.

For the size of the shoes worn by the head of state, these are cheap shoes because they are only priced at Rp. 435,000 for one pair.

In terms of appearance, in fact, Jokowi has become the talk of Malaysian netizens, especially the shoes he wears.

Furthermore, because of the shoes he wears, Jokowi is compared to the Prime Minister of Malaysia.

Twitter friends, I want to tell you that the shoes that Jokowi wore the other day when he met Elon Musk in the USA were the Project NAH brand made in Bandung, Indonesia,” wrote the Twitter account @syedakranim in Malay.

“The price is around RM 112 (worth approximately 375 thousand),” he added.
“This man [Jokowi] really wants to advance his country, so he even thinks about this little thing,” he added.

The tweet has been liked more than 10,000 times and has received responses from Malaysian and Indonesian netizens.

Get Ready, Analog Tv Broadcasts Will Be Turned Off in the East Java

The Government Has Issued 273 Tourism e-Visas for Foreign

Get ready! A total Lunar Eclipse Will Appear in Indonesia’s Sky