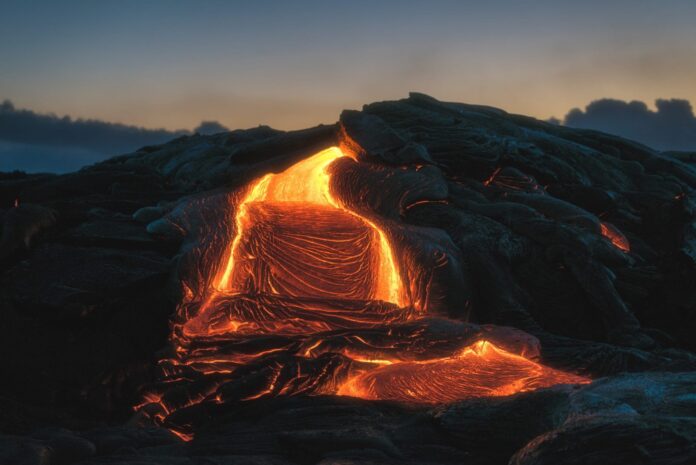 Reported by the Associated Press, Tuesday (22/12), the eruption of the volcano also made the temperature of the lake water at its peak rise to a boil.

The eruption occurred at night, so that it brightened the sky until it was orange due to the rays from the lava.

The local residents were desperate to witness the natural event from a safe distance.

According to a weather expert from the Hawaii National Weather Service, Tom Birchard, the lava mixed with the lake water triggered a large eruption for an hour. This is because the reaction that occurs when water meets lava which has a very high temperature can trigger an explosion, because the water instantly turns into steam with very high pressure.

Birchard said all the water in the lake was dry now. The eruption triggered clouds formed by the nine kilometers high evaporating lake water.

According to the US Geological Survey, the eruption of Mount Kilauea is not too dangerous because it is still in the crater. Until now, there has been no appeal for residents to immediately evacuate due to the eruption.

The National Weather Service warned residents to be careful about the ash fall from the eruption. Because if it is inhaled into the lungs or into the eye it can trigger irritation.

On the other hand, the spokesperson for Hawaii Volcanoes National Park, Jessica Ferracane, said the eruption was dangerous for local residents.

“The level of sulfur gas is currently quite high and the eruption is still ejecting very hot volcanic rocks from the crater, and it is dangerous to people around, including those with heart or respiratory disease, babies, children, and pregnant women, “Ferracane said.

According to Ferracane, another problem, was that residents flock to see this natural event. As a result, the parking area leading to the national park was full, so visitors had to queue.

In fact, the current corona virus pandemic is still happening. Ferracane said that for now the visitors are still under control and health protocols can be enforced such as maintaining distance.

However, he could not guarantee if the number of visitors increased whether health protocols could still be followed.

“For now, we have not managed the crowd. We urge them to wear masks to prevent Covid-19 transmission, because some visitors do not wear masks,” Ferracane said.

The last major eruption of Mount Kilauea occurred in 2018. At that time the eruption destroyed more than 700 houses as a result of being hit by lava.

The lava also buried an area that the size is as wide as Manhattan in New York, with a thickness of 24 meters. The lava flow also continued for four months.

Although it is dangerous because it is still active, there are many residential locations around Mount Kilauea.

Mount Kilauea is one of the most active volcanoes in the world.