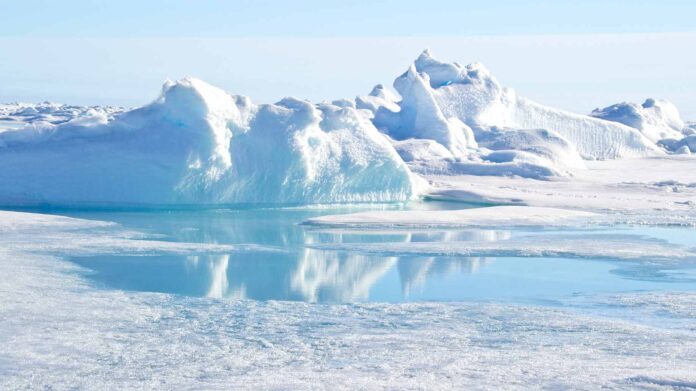 The Earth as a whole has lost 28 trillion tons of ice at the poles between 1994 and 2017. However, the study notes, since 1990 the Earth has only lost about 800 billion metric tons of ice every year.

A study published in the journal The Cryosphere notes melting ice around the world over the past few decades. The findings are striking. Ice continues to disappear over large areas of the Earth, due to climate change.

Increased air temperatures have caused mountain glaciers to shrink from the European Alps, the Himalayas in Asia to the Andes in South America.

The study shows that mountain glaciers around the world have lost nearly 10 trillion tonnes of ice since 1960 in rapid decline.

In Antarctica, most of the melting ice comes from glaciers that destroy the ocean, or from glaciers returning to the ocean. Recent studies have found that warm ocean currents cause glaciers to melt and make ice shift toward the ocean.

Scientists are still investigating the warm springs in Antarctica, but some experts believe that climate change is driving the ice in Antarctica to slowly melt, reports Scientific American.

In Greenland, the same phenomenon is taking place. But Greenland’s melting comes from melting ice on the surface, or ice melting at the top. The hot temperature has increased, triggering the melting of the ice in the Greenland region.

The loss of mountain glaciers and ice sheets is a contributor to global sea level rise. A new study estimates that there has been a 34 millimeter rise in sea level since 1994.

Quoted by India Today, Researchers note that melting ice around the world is triggering sea level rise which increases the risk of flooding in coastal communities.

“Although every region we studied was losing ice, the losses from the Antarctic and Greenland ice sheets were occurring the fastest,” Thomas Slater, researcher at the University of Leeds, UK, said.

In addition, researchers also found a rise in temperature in the atmosphere and oceans by 0.26 and 0.12 degrees Celsius, respectively, every decade since 1980.

The cold seas are important habitats for wildlife, including polar bears and walrus and marine mammals.

The ice sheet has a bright surface that helps it reflect heat from the sun. Many experts believe that shrinking sea ice is accelerating the rate of warming in the Arctic. Currently the temperature there has doubled from normal.

Get to Know the Apurva Kempinski Hotel, the Main Location of...