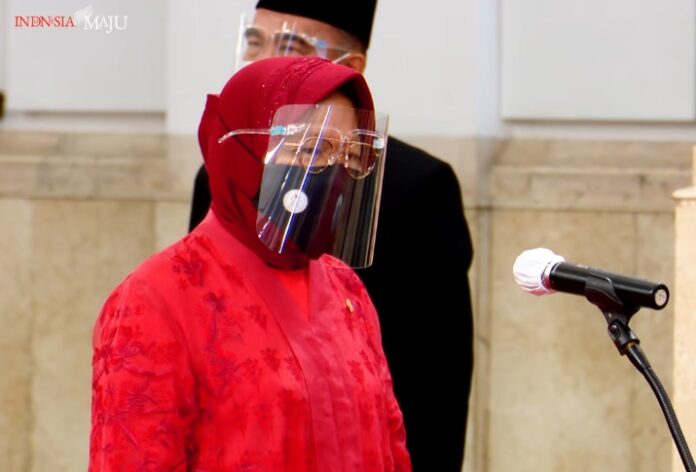 Tri Rismaharini officially served as Minister of Social Affairs and at the same time was still Mayor of Surabaya. It turns out that this woman who is familiarly called by name Risma has received permission from President Joko Widodo (Jokowi) to temporarily hold those two positions.

Risma was inaugurated as Minister of Social Affairs by President Jokowi at the State Palace, Jakarta, Wednesday (23/12/2020) morning. Risma was appointed along with 5 other new ministers.

After a while after being inaugurated, Risma immediately handed over the minister position with Muhadjir Effendy, who was appointed as interim minister after Juliari Batubara was involved in a corruption case. In her remarks, Risma revealed that she is still the Mayor of Surabaya.

“Because I am still the mayor of (Surabaya) maybe for a while,” Risma said in the Social Minister’s handover event which was broadcast live on the YouTube account of the Ministry of Social Affairs, Wednesday (23/12).

Regarding this concurrent position, Risma said that it’s with President Jokowi’s permission. Risma said Jokowi had temporarily allowed Risma to go back and forth from Jakarta to Surabaya.

Risma also expressed her desire to return to Surabaya as soon as possible because Risma will still inaugurate some places in Surabaya. Two of them are a bridge and a sports museum.

“I built a bridge with a fountain, it’s a shame if I don’t inaugurate it, I just want to go home. Same as inaugurating the sports museum because there is Rudi Hartono’s jersey, there is Alan Budi Kusuma’s racket, I want to inaugurate it for the generations of Surabaya. , ” Risma said.

Risma received the spotlight because of the dual position.

The concurrent position held by Risma received various comments. One of them is from PKS.

PKS considers the multiple positions held by Risma as unethical and not a good example.

“It is unethical. And it does not set a good role model. It could be the intention to complete the task until it is completed first,” the Chairman of the DPP Social Justice Party (PKS), Mardani said to reporters, Wednesday (23/12).

The member of Commission II of the People’s Representative Council (DPR) of Indonesia encouraged Risma to immediately leave her post as a mayor. Even so, Mardani is sure that Risma will immediately resign.

“As soon as possible the post of mayor will be removed. All of Mrs. Risma’s good intentions must be followed in a good way. I am sure that it will not take long for her to resign from the mayor position. Multiple positions are not good for all,” he said.

On the other hand, an elite National Awakening Party (PPP) member, Nurhayati is sure that Risma will immediately resign from her position as a mayor in the near future. According to Nurhayati, Risma cannot hold multiple positions.

“Surely Mrs. Risma will resign from the mayor in the near future,” Nurhayati told reporters.