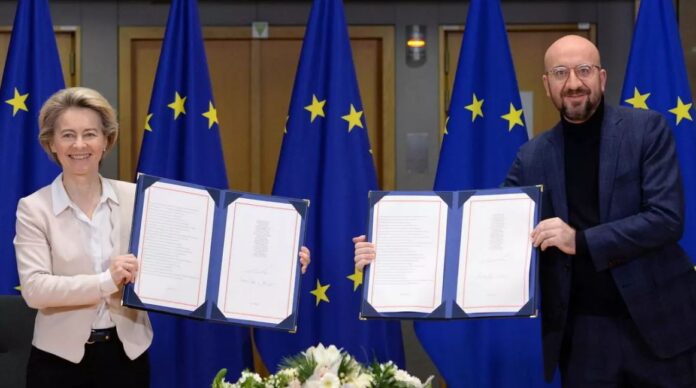 The UK and the European Union signed a Cooperation and Trade Agreement after Brexit on Wednesday (30/12).

The deal was signed a day before the UK broke away from the single European Union market.
The agreement was a welcome end after nine months of tough negotiation between the UK and the European Union.

“This is a long way to go. It is time to put Brexit behind. Our future is created in Europe,” the European Commission President, Ursula von der Leyen, said with a smile at a signing ceremony in Brussels.

After being signed by von der Leyen, the 1,246-pages document was flown by the Royal Air Force plane to London to be signed by British Prime Minister Boris Johnson.

After signing, Johnson raised a thumb up. He called this momentum as the start of a beautiful relationship between the UK and countries in the European Union.

“This is a great deal for this country and also for our friends and partners,” Johnson said.

The agreement document describes in detail the cross section of trade, law enforcement and conflict resolution between the agreement that separates the UK and European markets on December 31, 2020.

Starting January 1, 2021, citizens cannot move freely from the UK to the European Union, and vice versa.

The UK decided to separate from the European Union in 2015, with the results of supporters of Brexit getting 52 percent of the vote, against groups of opponents as much as 48 percent.

The Government Will Give Tax Relief to New Capital Investors