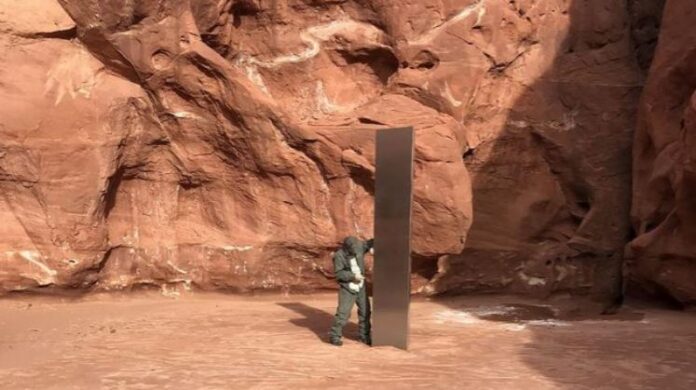 A mysterious metal landmark that is thought to be a monolith has been found in the desert of the state of Utah, United States.

This monolith was discovered by public safety workers in southeast Utah. They were exploring the area by helicopter on Wednesday (18/11), looking for the Bighorn sheep, a crew then saw the monolith object.

“One of the biologists saw it, and we immediately flew over it,” pilot Bret Hutchings explained to CNN.

“He screamed, wa, wa, wa, turn around, turn around!” Then I said, “What?”. The biologist then said again, “There is something downstairs, we have to see that,” he said, mimicking the conversation in the helicopter.

When approached, the monolith was about 10 to 12 feet (3-3.6 meters) high and firmly planted in the ground. They thought the monolith looks like an artistic expression rather than an alien-made object.

“We were a little joking, saying that if one of us suddenly disappeared,” helicopter pilot Bret Hutching said during an interview by KSL-TV, reported the Washington Post.

However, under US rules, it is illegal to create art structures without a permit on public land.

“It doesn’t matter which planet you are from,” Utah authorities said in a statement released Monday.

It is not clear who planted the monolith. However, Hutchings thought it was the strangest thing he has seen in years flying over the Utah desert.

The Utah State Department of Public Safety (DPS) said they would not disclose the monolith’s exact location for reasons of public safety. They also warned that people who try to visit it might find themselves stranded amidst the rocky terrain.

Quoting Sky News, Hutchings admitted that he thought the object belonged to NASA. He thought it was a satellite or something related to space.

He also said it appeared to be man-made. Probably made by ‘some of the artists or big fan of the science fiction film’ 2001: A Space Odyssey ‘. In Stanley Kubrick’s 1968 film, a metal monolith is found in the desert by monkeys.

The Utah DPS posted pictures and footage of the discovery on its website.