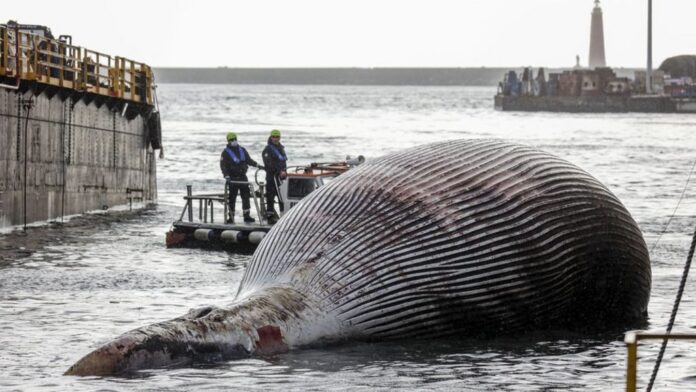 The carcass of a whale believed to be one of the largest whales ever found in the Mediterranean Sea was found off the southern coast of Italy.
Coast guard divers found the whale in waters near the port of Sorrento, on Sunday (17/01).

They were led to the dead mammal by a young whale that appeared stressed, officials said.

This finding triggered a major operation to remove the 70 tonne carcass which was finally completed on Wednesday (20/01).

The lifeguard said it was possibly one of the largest whale carcasses ever found in the region.

Shortly after divers found the animal on Sunday, its body was floating on the surface of the sea and officers decided to carry out an elaborate operation to transfer it ashore.

Two ships were involved in the operation and the wreck was found on Tuesday (19/01) night.

Coast guards then towed the dead whale from Sorrento to the port of Naples, arriving on Wednesday.

The operation to locate and remove the carcass takes three days.

Post-mortem examinations will be carried out by marine biologists and other experts who are investigating the cause of the whale’s death, officials said.

There are also plans to have the whale’s large skeleton displayed at the museum.

Meanwhile, the coast guard is monitoring any further signs of the young whales leading them to the carcass.