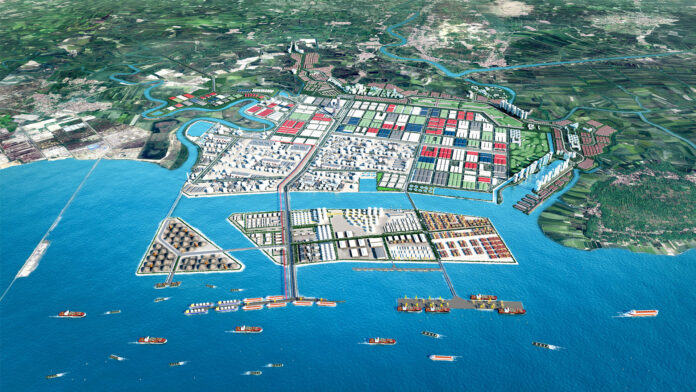 The Gresik region, East Java, will soon become a Special Economic Zone (SEZ). Later, the area will become a center for nickel and steel smelter, electronics, petrochemical, and energy industries. This has been established through Government Regulation (PP) NO 71/2022 by President Joko Widodo (Jokowi).

SEZ Gresik is located in Gresik district, East Java province facing the Madura strait, Special Economic Zone Gresik has a geographical advantage in the form of the island of Madura as a natural breakwater which makes SEZ Gresik an industrial area that is free from tsunamis and earthquakes.

This golden mountain is called the Wabu Block, a former mining area of ​​PT Freeport Indonesia that has been returned to the government.

This golden mountain has become one of the sources of “treasure” for Indonesia. The amount of gold resources in this block is no joke, reaching 8.1 million ounces.

MIND ID noted, that when multiplied by the gold price of around US$ 1,900 per troy ounce, the potential value of gold resources in this block reaches around US$ 15.4 billion or around Rp. 221.7 trillion (assuming an exchange rate of Rp. 14,400 per US$).

This amount of resources is still based on the results of the calculation of resources in 1999 for the categories measured (measured), indicated (predicted), and inferred (suspected).

Also in this area, PT Freeport Indonesia (PTFI) is the anchor tenant of the Gresik SEZ with investment in the construction of a smelter reaching Rp 42 trillion with export and domestic off-takers.

The investment from PTFI includes the construction of a new copper refining facility with the largest single-line capacity design in the world using high technology.

Coordinating Minister for the Economy Airlangga Hartarto said that with the smelter in the Gresik SEZ, all added value would be produced in Gresik, after 40 years of which US$ 2 billion was enjoyed on average by other nations.

SEZ Gresik has a total land area of ​​2,167 hectares with the main activities being the metal industry, electronics industry, chemical industry, energy industry, and logistics.

During the inauguration of the groundbreaking smelter last October 2021, Jokowi said that Indonesia has very large copper reserves, in the category of 7 countries with the largest copper reserves in the world.

For this reason, it must be used as well as possible, as much as possible for the prosperity of the people, by creating the highest added value for the economy.

“Don’t let us down the mine, we have the concentrate, the smelter, the downstream is in other countries, as the Minister said, it’s in Spain, Japan, the added value means those who enjoy them. This is why the PT Freeport smelter was built domestically, namely in Gresik East Java Province,” said Jokowi.

IMF Predicts Indonesia Will Not Be In Recession