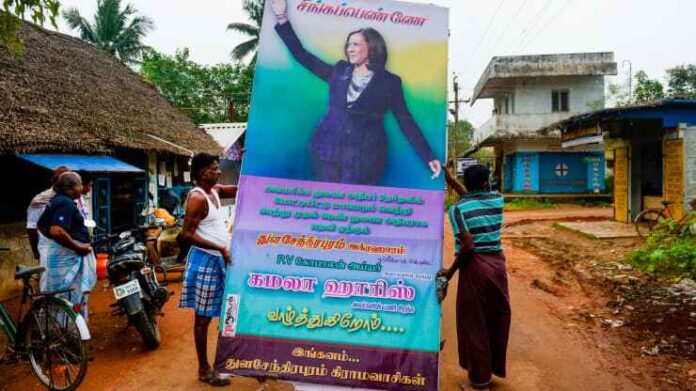 Kamala Harris, 56, is a daughter of Indian and Jamaican immigrants. Her maternal grandfather was born in the village of Thulasendrapuram, about 215 miles from Chennai in the southern Indian state of Tamil Nadu more than a century ago.

Villagers from Kamala Harris’s ancestral home in southern India made offerings of fruit, lit firecrackers and prepared hundreds of snacks in celebration of her swearing-in Wednesday as US vice president. Calendars featuring the faces of Biden and Harris have been distributed throughout the village by a co-operative.

Thulasendrapuram, where Harris’s grandfather was born, has been in party mode since November when Joe Biden and Harris won the American presidential election.

Her inauguration thousands of miles away in Washington has sparked a day of “Harris-mania” in the Tamil Nadu village of 400 people, as children waved pictures of their hero in streets filled with firework smoke.

Jubilant locals laid out hundreds of Chakkali — a popular south Indian spiral snack — shaping some to spell out “Kamala Harris”, while bowls of sweets were passed around.

Harris, 56, was born in California, but was taken often to India by her mother — breast cancer specialist Shyamala Gopalan — and has spoken about the influence of her grandfather P.V. Gopalan, a senior Indian civil servant.

To Promote G20, B20 Indonesia Holds Bilateral Visit to India