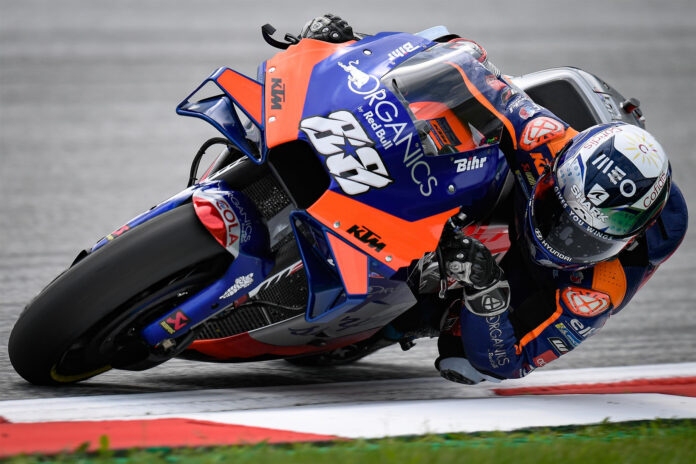 Miguel Oliveira emerged as the winner in the Portuguese MotoGP which was the closing series for the 2020 season. This KTM Tech3 rider appeared dominant since the start.

The last MotoGP 2020 race was held at the Portimao Circuit, Sunday (22/11/2020) at the local time. Miguel Oliveira opened up significant distance in the second lap.

This host rider continued to emphasize this advantage, until he finally crossed the finish line as the front man. Franco Morbidelli raced at the second position for most of the laps, but  Jack Miller overtook him on the final lap.

Meanwhile, Valentino Rossi did his last race with the Yamaha factory team and finished in 12th position. Except for Morbidelli, three Yamaha riders were outside the top 10, they were Vinales, Rossi and Fabio Quartararo.

For Miguel Oliveira, this is the second victory in his career in the MotoGP class. Previously, the 25-year-old racer won the Styria MotoGP.

The three leading positions do not change after the start. Miguel Oliveira took the first round in pole position, followed by Franco Morbidelli and Jack Miller.

2020 MotoGP world champion Joan Mir almost fell in the third corner after touching Johann Zarco. Meanwhile, Oliveira immediately sped off and opened a distance of up to 1.2 seconds in the second round.

Brad Binder became the first rider to fall in this race. He crashed in the third lap. Up front, Oliveira was already 2.5 seconds ahead of Morbidelli when he entered the fifth round.

Oliveira was tough and took the lead by four seconds from second-placed Morbidelli on entering lap 10. Pol Espargaro moved up to fourth, after passing Stefan Bradl and Cal Crutchlow.

Fabio Quartararo was involved in a fierce battle with Takaaki Nakagami, but was unable to stop this Japanese racer. In the process, Quartararo was passed by Andrea Dovizioso and dropped to 12th position after being overtaken by Alex Marquez on lap 11.

Alex Rins looked to be having tire problems in the 14th lap. He lost eight positions after being passed by Dovizioso and Nakagami.

Joan Mir decided to go back to the garage when he entered the 15th lap because of a problem. Up front, Oliveira comfortably took the lead while Morbidelli began to be approached by Miller.

Oliveira took the lead nearly 4.5 seconds as the race entered lap 20. Cal Crutchlow lost his fifth on the way wide and dropped to ninth. At this point, Miller was already sticking to Morbidelli for second place.

Vinales passed Crutchlow on lap 24, followed by Rossi in the next. Oliveira maintained pole position, meanwhile Miller snatched second from Morbidelli in the final sector.

Booster Vaccine as Travel Requirement Will Be Applied In 2 Weeks