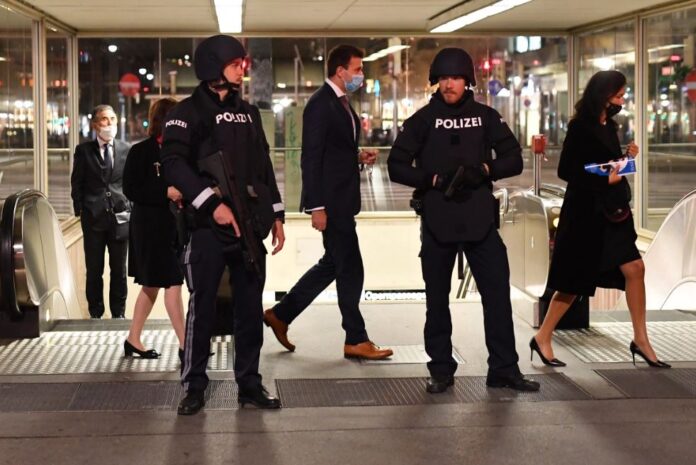 Three men of Turkish and Palestinian descent stepped in to help a police officer and an elderly woman in the attack in Vienna on Monday (02/11).

Recep Gultekin was shot in the leg while helping a woman and her friend, Mikail Zen.

Five people, including the attackers, were killed and 22 injured when the shooting took place across from the Synagogue in the Austrian capital.

The man accused of carrying out the attack has been described as a 20-year-old terrorist who was released from prison in December. He was shot dead by police in the incident.

Joda, 23, worked at a nearby McDonalds, and told local newspaper Kurier that he was carrying goods into the restaurant when attackers started shooting at passers-by.

When two police officers came to help, the attackers shot the gun on them and one of them was hit by a bullet.

“I pulled him behind a concrete bench and tried to stop the bleeding,” Joda said. “There is blood everywhere.”

The perpetrator fled after more police arrived at the scene and Joda later helped taking the policeman to the nearest ambulance.

He was assisted by Zen and Gultekin, both of them were Turkish descent. Previously Gultekin, 21 years old, had brought an injured woman to a restaurant. Zen, a martial arts activist and personal trainer, told Kurier that he saw policemen who were bleeding after gunfire.

“We immediately knew what to do, there was no choice but to help,” said this 25-year-old man.

“Austria is our home. We will help anytime.”

Police have yet to confirm details of the incident, but Minister of Home Affairs, Karl Nehammer told local media that the officer was taken to safe place by an Austrian with a migrant background.

“No terrorist attack has succeeded in destroying or dividing our society,” he added.

The Turkish Ambassador to Austria, Ozan Ceyhun, also hosted Zen and Gultekin at the Turkish Embassy and praised their behavior.

Security in Vienna has been tightened amid police efforts to hunt those involved in the attacks. A total of 14 people have been arrested after a series of police raids. However, authorities believed the gunman killed by police acted alone.

Austrian Chancellor, Sebastian Kurz, said the four victims who died were an old woman, an old man, a young man passing by and a shop assistant.

It was clearly an attack fueled by “hatred against our way of life, our democracy”, the chancellor said.

ESDM Will Increase the B40 Biodiesel Quota to 15 Million Kilo...

The Covid-19 Cases Increase Will Occur in the Next One or...