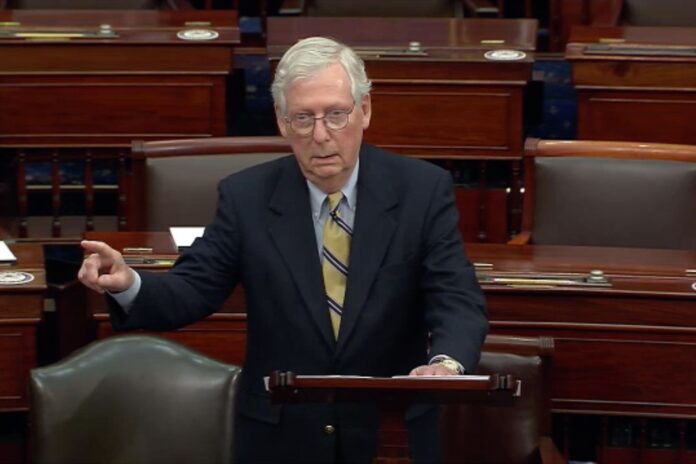 Former President Donald Trump is escalating a political war within his own party that could undermine the Republican push to fight President Joe Biden’s agenda and ultimately return the party to power.

A day after blistering Mitch McConnell, the Senate’s top Republican, as a “dour, sullen and unsmiling political hack,” Trump repeated his baseless claim on Wednesday that he was the rightful winner of the November election in a series of interviews with conservative outlets after nearly a month of self-imposed silence.

Trump continued to attack McConnell, accusing the Senate GOP leader of failing to stand up for Republicans after McConnell blasted Trump for inciting the Jan. 6 U.S. Capitol riot despite voting to acquit the former president at his second impeachment trial.

Leading GOP strategists described the exploding feud between the Republican former president and the Senate’s most powerful Republican as, at best, a distraction and, at worst, a direct threat to the party’s path to the House and Senate majorities in next year’s midterms.

“I don’t think he cares about winning,” Steven Law, a McConnell ally who leads the most powerful Republican-aligned super PAC in Washington, said of Trump. “He just wants it to be about himself.”

Law noted that Trump lost several states where Republicans face must-win Senate elections in next year’s quest to break up Democrats’ control of Congress, including in Arizona, Georgia, Pennsylvania and Wisconsin. Republicans are also competing in Nevada and New Hampshire, where Trump was defeated, and in North Carolina, where Trump barely won.

If Trump tries to make himself “the center of attention,” Law said, “that actually could cost Republicans seats in the general election.”

Donald Trump Makes A New Policy, Tourists Who Visit the US Must Pay US $ 15,000