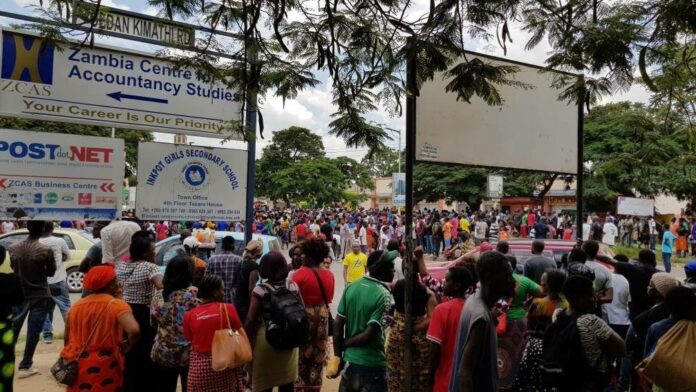 Two Protesters were killed in a protest outside the police station in the Zambian capital, Lusaka on Wednesday local time. The demonstration coincided with an interogation process of opposition leader, Hakainde Hichilema, at the police station.

Reported by AFP on Thursday (24/12/2020) police arrived to disperse the crowd. Shots were heard, two bloodied protesters lay on the scene after other protesters escaped.

Police statements stated that two people reportedly killed by gunfire, after tear gas was used to disperse an unregulated crowd. They are talking in a situation that has not yet met clarity.

“I said that because of the way the execution was carried out. It was carried out professionally,” he said, denying that the victim was shot in the head.

“The blood of those who died today is in the hands of (President Edgar) Lungu,” he added.

Lungu, 63 years old, is struggling with popularity issues and solving internal problems within the party. This was triggered by Zambia’s economic problems and outrage over alleged corruption.

The country is very dependent on copper, whose demand is falling.

Hichilema, known to his supporters by the initials HH, told reporters he was called by the police to answer questions about a property purchase he made 20 years ago.

Hichilema said the death of the two protesters will not be in vain, there will be a change of government on August 12, 2021.

A veteran campaigner and independent entrepreneur, Hichilema made five bids for the presidency between 2006 and 2016.

After narrowly losing in 2016, Hichilema spent four months in prison as he fought over the outcome. He has followed suit to step down as leader of the United National Development Party (UPND) if he fails once again in presidency.

Covid-19 Attacks ASEAN, What About Indonesia?

The Effect of Global Warming, Snow In The Ski Resort Evaporates