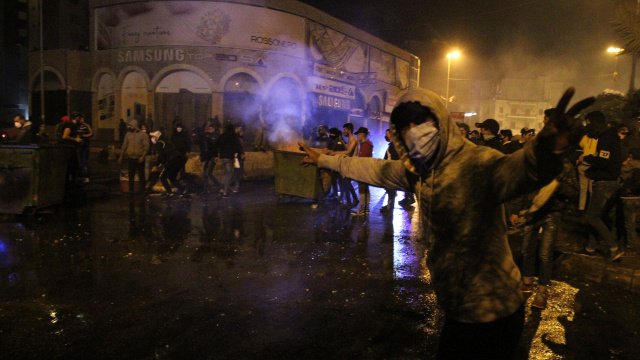 The National News Agency said 226 people were injured in the confrontations, including 26 policemen. One 30-year-old man, Omar Taibi, died of his wounds, it said. The Red Cross said it transported 35 injured to hospitals in the city.

Mourners in northern Lebanon on Thursday laid to rest a 30-year-old killed during violent confrontations the previous day between protesters and security forces, the latest unrest as the nation grapples with both the pandemic and the worst economic crisis in Lebanon’s history.

More than 220 others were injured in the clashes in the city of Tripoli as frustrations boiled over amid deteriorating living conditions and strict coronavirus lockdown measures. The violence marked a serious escalation in protests that began Monday and continued for three straight days into Wednesday night, denouncing the extended shutdown that exacerbated already dire conditions amid the unprecedented economic and financial crisis.

Tripoli, Lebanon’s second largest city and the most impoverished, has been a center for demonstrations and rioting against Lebanon’s political class.

Dozens of young men have been taking part in the nightly protests, throwing rocks at security forces and in some cases torching vehicles. On Wednesday, protesters repeatedly tried to break into the municipal building. Some lobbed hand grenades at security forces, who responded with water cannons, volleys of tear gas and finally, live ammunition.

The government has imposed a nearly month-long nationwide lockdown and round-the-clock curfew that lasts until Feb. 8, amid a dramatic surge in coronavirus infections. The measures come on top of a crippling economic and financial crisis that preceded the pandemic in this small country of nearly 5 million people and over 1 million refugees.

Hospitals in Lebanon are now overwhelmed with COVID-19 patients, reporting near full occupancy in intensive care-unit beds. Oxygen, ventilators and medicine are in short supply. Nearly 290,000 infections have been recorded since last February and 2,553 deaths amid record-breaking COVID-19 daily fatalities.