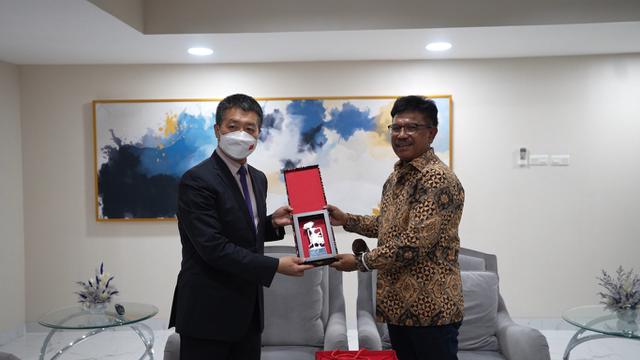 Digital transformation in Indonesia is likely to be widely realized soon. This is because Indonesia received assistance from China regarding the development of technology, information, and communication. Minister of Communication and Information (Menkominfo) Johnny G. Plate confirmed that China would increase its cooperation with Indonesia.

“The Ambassador said that China will certainly continue to provide support in the context of digital transformation in Indonesia,” said Johnny when receiving the visit of the Chinese Ambassador to Indonesia Lu Kang, Thursday (8/9/2022).

He also stated that companies from China will continue to try to help in terms of investment and carry out ICT infrastructure development work in Indonesia so that it can run well.

The Minister of Communication and Informatics hopes that the meeting will further strengthen the cooperative relationship between the two countries, not only to support the 4G network in Indonesia but also in the development of 5G technology.

On the same occasion, Lu Kang said the digital transformation industry is one of the important fields for every country. According to him, this has also become a concern for the government of President Joko Widodo.

He also explained that the ICT industry and investors from China have collaborated and operated in Indonesia. In fact, according to him, there has been the development of bilateral cooperation on almost all lines.

“Actually, the Minister gave me a lot of good advice and guidance on how China and Indonesia should continue this development, which can bring tangible results and benefits to both countries,” he explained.

Not only China, as previously reported, the University of Indonesia (UI) together with the Korea International Cooperation Agency (KOICA) and the Directorate General of Higher Education, Research and Technology, the Ministry of Education, Culture, Research and Technology of the Republic of Indonesia (Kemdikbudristek RI) agreed to develop a knowledge system integrated information technology based.

“Our partnership with KOICA is really crucial and important, not only for UI but also for Indonesia,” said UI Vice Chancellor for HR and Assets Prof. Dr. Ir. Dedi Priadi, at the UI Depok campus, West Java, Wednesday.

He said the signing of the Record of Discussion (RoD) of the three parties, namely the ICT-based Integrated Knowledge System Development Capacity Building project at UI was carried out with several objectives.
One of the goals of the project is to build a high-tech eco-friendly building at the Faculty of Cultural Sciences (FIB) UI which will host the Connectivity Hub (C-Hub).

For this reason, he hopes that there will be a strong impact from the cooperation of the two countries to contribute to a more friendly world.

“From this agreement, we look forward to positive results,” said Dedi Priadi.

Representing KOICA, Jeong Yun-gil stated that the Massive Open Online Courses (MOOCS) system has an important role in developing the capacity of UI lecturers and students, especially during the pandemic. This project is designed to strengthen and improve the quality of human resources in Indonesia.

As in South Korea, he said, human resource development is not the only key to achieving economic development but is one of the various development agendas to advance the country.

Covid-19 Vaccine Covovax, New Variant That Will Be Available in Indonesia

The Trans Java Toll Road Will Not Be Completed Shortly