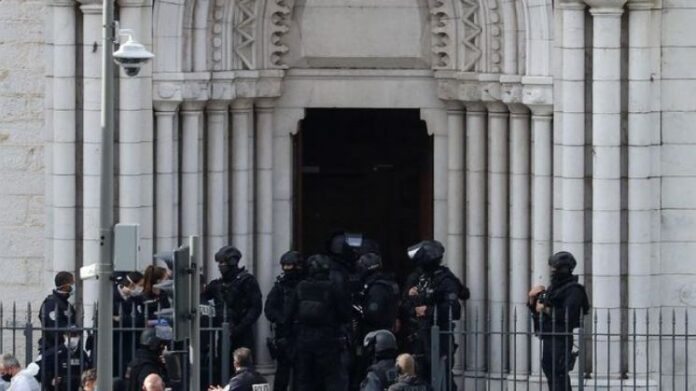 The perpetrator of the attack, which killed three people in the vicinity of the Notredame Basilica Church, Nice, France, is strongly suspected of Tunisian citizen.

AFP reported, the perpetrator of the attack was identified with the name Brahim Aouissaoui,  21 years old, arrived in France just a few weeks.

AFP reported that the perpetrator arrived in Europe for the first time on Lampedusa Island, Italy. He was quarantined by local authorities. Quarantine is carried out in connection with the corona virus pandemic.

After being quarantined, the perpetrator was ordered to leave Italy. He then arrived in France in early October until the attack occurred.

Previously there was an attack around the Notredame Basilica Church located in Nice, France. Three people died. One of them was beheaded by the perpetrator.

The attack occurred in the middle of a polemic of French President Emmanuel Macron did not prohibit Charlie Hebdo from publishing comics or cartoons of the Prophet Muhammad.

Macron’s controversy has drawn criticism from a number of state leaders, especially Islamic countries in the Middle East and North Africa.

Prior to the incident, there was also the murder of a teacher named Samuel Paty (47). He was beheaded in the Eragny by a young immigrant from Chechnya, Abdoullakh Abouyezidovitch (18) on 17 October 2020. The murder could not be separated from the attitude of Samuel Paty who talked about the cartoon of the Prophet Muhammad published by Charlie Hebdo. French President Emmanuel Macron himself did not prohibit the publication of the cartoon until it received criticism from a number of Islamic countries.

Vietnamese People Hit by Panic Buying Ahead of Lockdown in Ho...