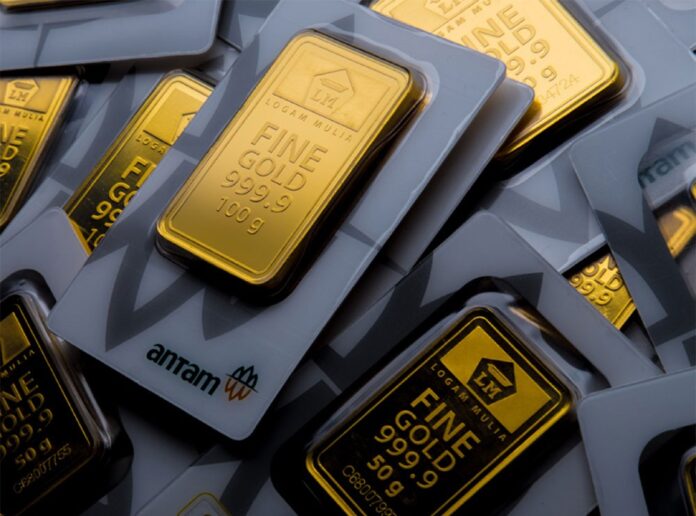 The gold price of PT Aneka Tambang (Persero) or Antam’s gold is at the level of Rp. 930 thousand per gram today, Friday (28/1). This figure decreased by IDR 8,000 from the previous trade, IDR. 938 thousand per gram

The decline also occurred with the buy-back price, which was down from Rp. 9,000 to Rp. 832 thousand per gram.

However, it should be noted that the prices above are the prices listed at Antam’s office, Pulogadung, Jakarta. These prices may vary at other outlets.

The prices listed above include Income Tax (PPh) 22 on gold bullion of 0.45 percent for holders of a Taxpayer Identification Number (NPWP), in accordance with Minister of Finance Regulation (PMK) Number 34/PMK.10/2017 concerning the purchase of gold bars that will be subject to PPh 22 of 0.9 percent.

Meanwhile, buyers who do not include their NPWP are subject to a higher tax deduction of 0.9 percent.

Commodity observer, Ariston Tjendra, predicts that international gold prices will be depressed today. This is because the market is still cautious about the Fed’s monetary tightening policy in 2022. Previously, the Fed was preparing to raise its benchmark interest rate in March.

Sentiment originating from the Fed’s monetary policy made the US dollar strengthen. When the currency of Uncle Sam’s country is mighty, the gold price will automatically weaken. Moreover, the realization of US economic growth which was better than projected also added to positive sentiment for the US dollar. Thus, the gold price has the potential to be further depressed.

Ariston also predicts international gold prices will move in the red zone today. In detail, the price of gold will be in the support range of US $ 1,780 per troy ounce and resistance of US $ 1,820 per troy ounce.