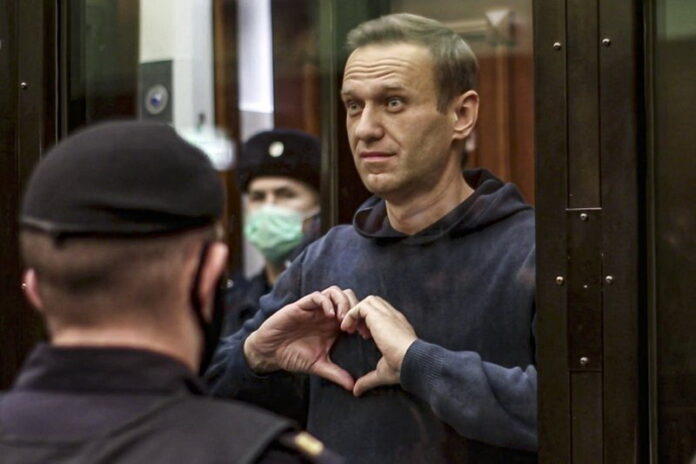 In a note from jail, opposition leader Alexei Navalny urged Russians Thursday to overcome their fear and “free” the country from a “bunch of thieves,” while the Kremlin cast the arrests of thousands of protesters as a due response to the unsanctioned rallies.

Navalny, who was sentenced to two years and eight months in prison earlier this week, said in a statement posted on his Instagram account that “iron doors slammed behind my back with a deafening sound, but I feel like a free man. Because I feel confident I’m right. Thanks to your support. Thanks to my family’s support.”

Navalny, 44, an anti-corruption campaigner who is Russian President Vladimir Putin’s most determined political foe, was arrested Jan. 17 upon returning from his five-month convalescence in Germany from a nerve agent poisoning, which he has blamed on the Kremlin. Russian authorities deny any involvement and claim they have no proof that he was poisoned despite tests by several European labs.

A Moscow court on Tuesday sent Navalny to prison, finding that he violated the terms of his probation while recuperating in Germany. The sentence stems from a 2014 embezzlement conviction that Navalny has rejected as fabricated and the European Court of Human Rights has ruled unlawful.

In a no-holds-barred response to the protest, police arrested over 10,000 protest participants across Russia and beat scores, according to arrest-monitoring group OVD-Info. Many detainees spent hours packed into police buses after detention facilities in Moscow and St. Petersburg quickly ran out of space. After a long wait, they were crammed into overcrowded jail cells with no precautions to prevent them from being infected with the coronavirus.