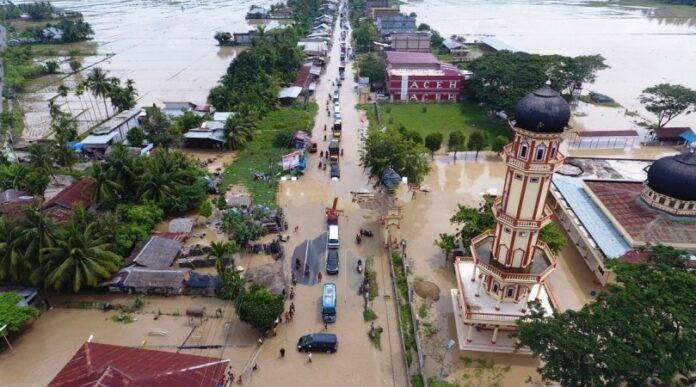 The high intensity of rain since Friday (4/12) hit parts of Aceh which resulted in floods of six areas. The six regions are North Aceh, East Aceh, Southeast Aceh, Subulussalam, Simeulue and Lhokseumawe.

Information from the Aceh Disaster Management Agency (BPBA) Pusdatin, there are about 290 villages in 51 sub-districts in six areas that are flooded and 75,393 people are affected.

The worst floods occurred in the districts of East Aceh and North Aceh. In these two districts the total number of refugees currently reaches more than 27 thousand. Meanwhile, 3 thousand hectares of rice fields in North Aceh are threatened with crop failure.

“This is due to the collapse of the Krueng Pase North Aceh dam. More than 3,000 hectares of rice fields are threatened with crop failure,” the head of BPBA, Sunawardi said when confirmed, Monday (7/12).

The water level varies from 20 centimeters to 2 meters. The North Aceh Regency Government has declared a flood emergency status.

Sunawardi added that the flood had also caused 4 bridges to be severely damaged: in Peudawa, Peureulak, Idi Tunong, and Peureulak Barat, East Aceh Districts. The flood also damaged some of the residents’ houses there.

As of last Monday, it was recorded that 2 students died as a result of being swept away by the flood currents. The victims came from East Aceh and North Aceh. However, the death toll increased by three, bringing the total to five people died.

“The number of victims has increased to 5, 4 from North Aceh and 1 from East Aceh,” the Head of North Aceh BPBD, Amir Hamzah confirmed, Tuesday (8/12).

Floods in the North Aceh and East Aceh regions have started to recede as of this Tuesday. However, in several other areas the water was still stagnant.

Some of the refugees are also still staying at the refugee camp. BPBA has distributed assistance to affected victims.

Expat Life’s Interview: “After 5 Years, Indonesia Chooses Whether to Stay...

The US Provides More Than US$ 130 Million for the Indonesian...