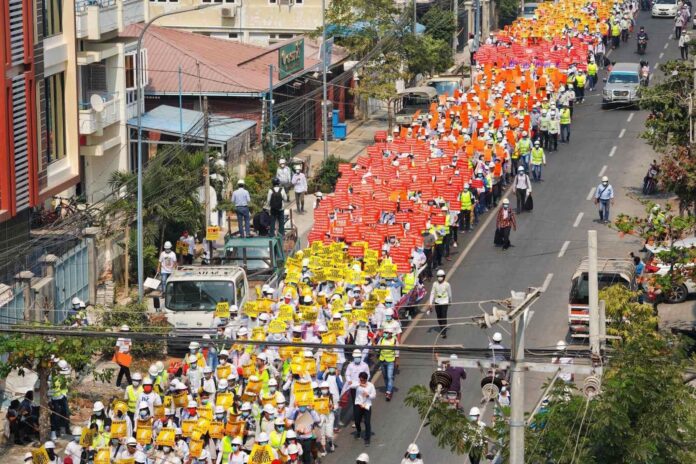 Demonstrators in Myanmar gathered Wednesday in their largest numbers so far to protest the military’s seizure of power, even after a U.N. human rights expert warned that troops being brought to Yangon and elsewhere could signal the prospect of major violence.

In addition to Yangon, fresh protests also roiled Myanmar’s second-largest city, Mandalay, and the capital, Naypyitaw, in defiance of an order banning gatherings of five or more people. But as evening approached, there were no reports of major violence.

Wednesday’s turnout in Yangon appeared to be one of the biggest so far in the city. Protesters have adopted a tactic of blocking off roads from security forces by parking their vehicles mid-street with their hoods up, using the excuse of having engine trouble.

One motorist, who declined to give his name for fear of repercussions, explained, tongue-in-cheek, that his car had broken down “due to the suffering that our people are undergoing now. We just stopped the cars here on the road to show that we do not want the military regime.”

The high turnout was spurred partly by the junta’s expectation that the protest movement was running out of steam, said Kyi Pyar, a former lawmaker from Suu Kyi’s party.

She referred to the military’s claim at a news conference Tuesday that there would be a gradual reduction in the number of protesters. In Naypyitaw, thousands of people, including private bank employees and engineers, marched down the city’s wide boulevards, chanting for the release of Suu Kyi and President Win Myint.

Protesters also poured into the streets of Mandalay, where on Monday security forces had pointed guns at a group of 1,000 demonstrators and attacked them with slingshots and sticks. Local media reported that police also fired rubber bullets into a crowd and that several people were injured.

The Feb. 1 coup has brought an abrupt halt to Myanmar’s fragile progress toward democracy, as Suu Kyi’s party was about to begin a second five-year term after winning a landslide in November’s election. The military justified its takeover with allegations of widespread voting irregularities, though the election commission found no evidence of significant fraud. The junta says it will hold power for a year before holding new elections.