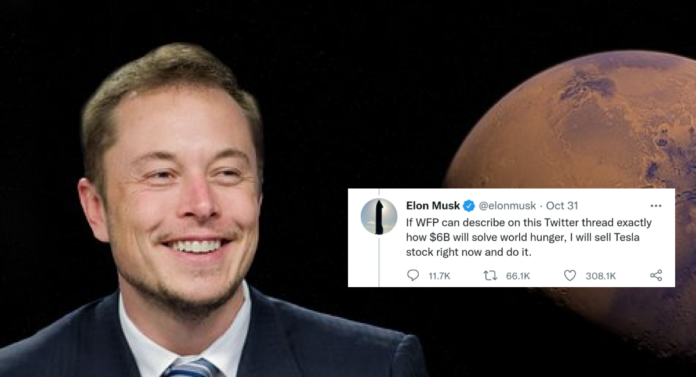 The richest man on earth, Elon Musk, challenge the United Nations World Food Program to explain in detail how his wealth could prevent 42 million people from slumping.

This challenge arise from the previous tweet posted by Dr, David Beasly. He tweeted a headline screenshot from CNN news America that states 2% of his wealth could possibly solve world hunger.

Even so, the owner of the Tesla company wants the use of these funds to be completely transparent. In fact, Musk requested that data on the expenditure of funds for the hunger program be disclosed to the public.

Beasly answers this Musk’s challenge. He replied to Musk’s tweet and stated that he was able to provide information disclosure on the use of the funds.

“Your team can review and work with us to be absolutely sure of that,” Beasley said.

But Beasley explained that the US$6 billion funds did not directly solve the hunger problem that looms over 42 million people in the world. But at least, the funds can reduce the risk of starvation.

As of 1 November 2021, Musk known to have about 311$ billion in assets. This property has doubled since the COVID-19 pandemic. Meanwhile, Tesla is listed as the sixth company in the United States that has a valuation of US $ 1 trillion or Rp. 14,250 trillion. This is the second-fastest record after Facebook in achieving this feat. That is, even if Beasley asks for donations of only 2% of his wealth, Elon Musk’s wealth will be unbothered.

Indonesian Internet Tariffs Become the Second Cheapest in the World