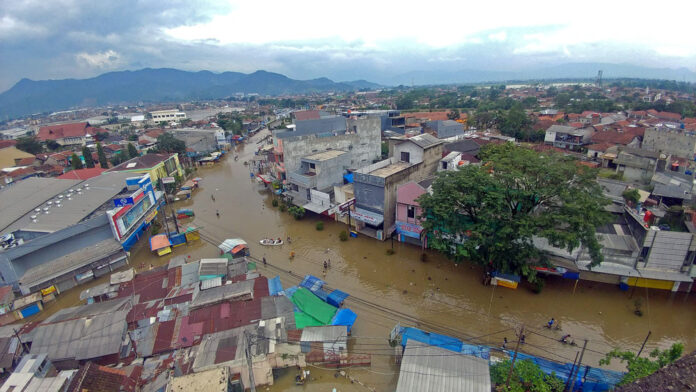 A total of 1,179 people were evacuated due to the flood that inundated the Bandung Regency area. The southern Bandung area was surrounded by floods triggered by heavy rains since Thursday (24/12) afternoon at around 17.00 WIB.

In Dayeuhkolot District, floods hit a number of villages including Dayeuhkolot Village and Citeureup Village, Pasawahan Village. A total of 4,813 family or 15,839 people were affected by the flood.

The impact of the floods was 187 families or 607 people being evacuated. The number of houses submerged was 2,122 units, 3 schools and 7 houses of worship were also submerged. Water levels were reported to be 10-80 cm.

Meanwhile, in Baleendah District, floods inundated Kelurahan Andir and Baleendah. A total of 6,936 households or 23,176 people were affected by the flood.

As the result, 152 families or 575 people were evacuated. In addition to submerging 5,242 houses, flooding in Baleendah District also resulted in 8 schools and 35 places of worship being flooded. The water level ranged from 10-90 cm.

“The number of affected and submerged units is still under assessment,” Erwin said in a statement.

Erwin said, apart from flooding, landslides also occurred in Cicalengka Wetan Village, Cicalengka District. As a result of the landslide, 3 families were affected. There were no fatalities in the incident.

“Three houses were affected. The time of the incident was at 15.33 WIB due to heavy rain and unstable land contours and not strong cliff walls,” he said.