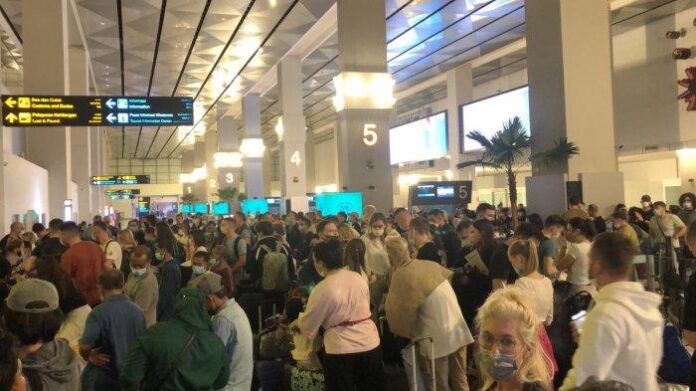 Hundreds of foreign citizens piled up at Terminal 3 of Soekarno-Hatta International Airport, Monday (28/12) night, as a result of the mandatory quarantine or isolation policy for five days.

“There were around 200 of them last night, but basically all of them have been transferred to the hotel,” Head of the Soekarno Hatta Airport Port Health Office (KKP), Darmawali Handoko said when contacted by CNNIndonesia.com, Tuesday (29/12).

Darmawali said the foreigners had complained because there was no prior notification regarding the five-day quarantine obligation at the hotel. However, he said that his party had already disseminated the information through foreign media reports.

According to him, the buildup took a long time and was not easily broken down. This is because hundreds of people, consisting of foreigners and Indonesians from abroad, have to wait in line for the bus that will take them to the hotel.

Darmawali said the Covid-19 Handling Task Force had helped his party in implementing health protocols to prevent the transmission of the corona virus at Soetta Airport.

To anticipate a similar incident, his party will tighten supervision until 31 December.

“Our strict supervision will continue until the end of December, because on January 1, foreigners are not allowed to enter,” he said.

Darmawali said that foreigners arrived at Terminal 3 of Soetta Airport this morning. However, he claimed conditions were more conducive because the number of foreigners and Indonesian citizens from abroad was not as many as last night.

Previously, a general surgeon, Aris Ramdhani, uploaded a photo showing the buildup of foreigners at the international arrival gate of Terminal 3 of Soetta Airport, Monday (28/12) night.

“Just got news from colleagues, this is the situation for Terminal 3 international arrival last night. I don’t know what we want to be,” Aris said via his Twitter account @arisrmd, as quoted by CNNIndonesia.com, Tuesday (29/12).

In the upload, foreigners crowding without complying with health protocols maintain a safe distance of 1.5-2 meters. The upload also received various responses from netizens.

However, foreigners who have been scheduled to arrive in Indonesia on December 28-December 31 2020 are required to follow the Covid-19 Task Force regulations through SE Task Force Covid-19 number 3 of 2020 concerning the Health Protocol for People Travel During Christmas Holidays and Welcoming the New Year 2021.

In this regulation, foreigners who have arrived in Indonesia are required to show negative evidence of Covid-19 based on the results of a PCR examination which is valid for 2×24 hours before departure. This negative Covid-19 certificate must be reported during a medical examination at the airport.

In addition, foreigners after arriving in Indonesia are required to re-check RT PCR and quarantine for five days at the place provided by the government.

After quarantine, the foreigner still has to do another RT PCR examination. If the result is negative, they are allowed to continue their journey in Indonesia.

Pertamax Price Increase Discourse Does Not Cause Inflation