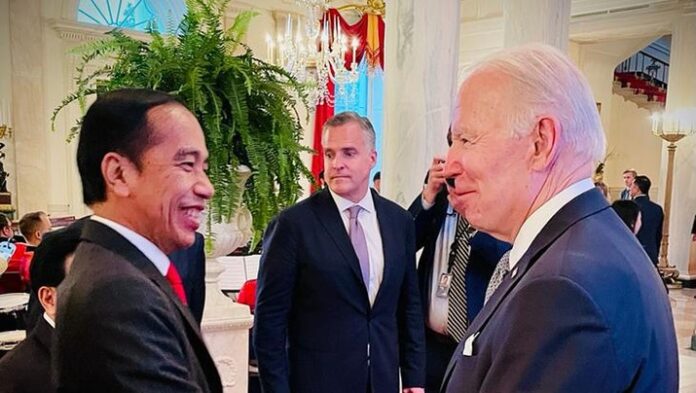 The President of Indonesia, Joko widodo, together with the leaders of other ASEAN countries had the opportunity to be entertained by the President of the United States, Joe Biden.

The event is a series of events of the ASEAN-US Summit which was held in Washington, D.C., United States, Thursday local time. During the event, Jokowi gave a direct hand message to Joe Biden.

there, Jokowi who arrived at the White House, Washington DC at 17:20 local time, was immediately greeted by Joe BIden. then shake hands, take pictures together, and state guest book.

In the photo documentation distributed by the Presidential Secretariat, Friday (13/5/2022), Jokowi was seen writing a short message in the US state guest book.

“Looking forward to a strong ASEAN-US partnership. See you in Bali for the G20. Joko Widodo, Indonesia,” wrote Jokowi in the book.

After that, Jokowi and the leaders of other ASEAN countries held a group photo session facing the National Monument.

Jokowi then headed to the Blue Room to join the dinner. During the dinner, Jokowi had the honor of repaying President Biden’s toast.

In his preliminary statement, Jokowi said that the ASEAN-US Special Summit was the right momentum to strengthen the ASEAN-US partnership in the future and welcomed in principle the ASEAN-US agreement to have a comprehensive strategic partnership.

“This partnership is in the middle of a world that is filled with current uncertainty. For that, I invite all of us to raise the glass for the ASEAN-US partnership which continues to contribute to increasing the value of multilateralism, peace and regional importance, the driving force of prosperity,” said Jokowi.

At around 20.00 WS, the dinner was over and Jokowi left the White House to return to the Ritz-Carlton Hotel.

Black Panther 2 Will Begin Filming on July 2021 Without Chadwick...