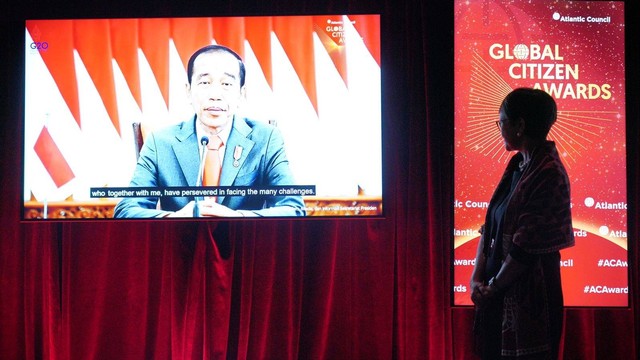 The President of Indonesia, Joko Widodo (Jokowi) received a prestigious award from the United States think tank, the Atlantic Council. The award is titled the Global Citizen Award. He said this award is intended for all Indonesian people.

“I dedicate this award to all the people of Indonesia,” said President Jokowi in his remarks via video message at the awarding ceremony as quoted from the Kemlu.go.id website.

The receipt of the award for President Jokowi was represented by the Indonesian Minister of Foreign Affairs (Menlu) RI Retno Marsudi.

“President Joko Widodo is the embodiment of the spirit that Indonesia wants to project to the world, namely the paradigm of collaboration, bridge-builder, and being part of the solution,” said Retno.

Jokowi was awarded for his leadership in the G20 Presidency, for bridging the impact of the war in Ukraine, and for broad support for advancing the fulfillment of human rights, democracy, and a better global health architecture.

On the same occasion, WEF Executive Chairman Klaus Schwab appreciated Jokowi’s achievement because he was considered capable of leading the Indonesian people as well as a leader who has a global vision, promoting world peace and prosperity.

The awarding of Global Citizen Award is an annual event held by the Atlantic Council on the sidelines of the United Nations General Assembly in New York. Awards are given to figures who are seen as making real contributions to the world.