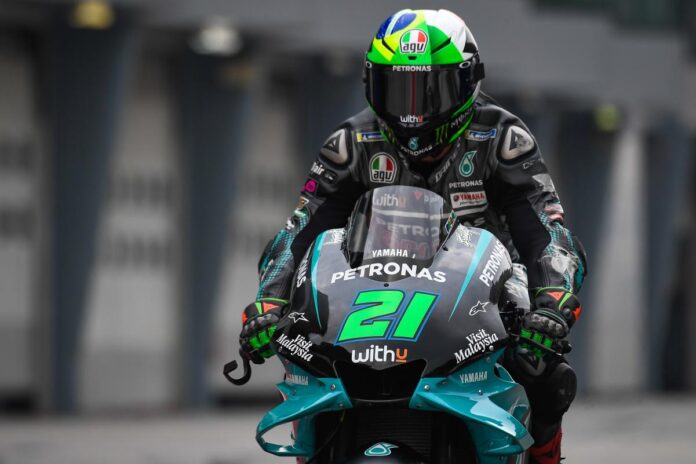 The Petronas Yamaha SRT racer, Franco Morbidelli came out as the first the winner of the 2020 Teruel MotoGP.

At the Motorland Aragon circuit, Sunday (25/10/2020) local time, Morbidelli led the race since the first lap. He was helped by the crash experienced by Takaaki Nakagami. That LCR Honda rider fell on the first lap, making Morbidelli occupy the leading position. Before Nakagami crashing, Jack Miller and Brad Binder fell just after the start. Binder hit Miller’s motorbike from behind until they both fell.

Surprisingly, Alex Marquez also fell when the race had only 10 laps more in remaining. At that time, he was in fourth position

Morbidelli was not overtaken until 23 laps passed at the Teruel MotoGP. This Italian rider recorded a time of 41 minutes 47.652 seconds.

Following Morbidelli, there were Suzuki riders, Alex Rins and Joan Mir. Rins touched the finish line 2.205 slower than Morbidelli, while Mir was 5.376 seconds away.

With this victory, Morbidelli has collected two titles in MotoGP 2020. Previously, Morbidelli celebrated his first title in the MotoGP series San Marino.

Morbidelli became the second racer from outside Spain to win the race at Aragon. Previously there was Casey Stoner.

Until the 13th lap, Franco Morbidelli was still in the forefront. He was followed by Alex Rins in second and Joan Mir in third.